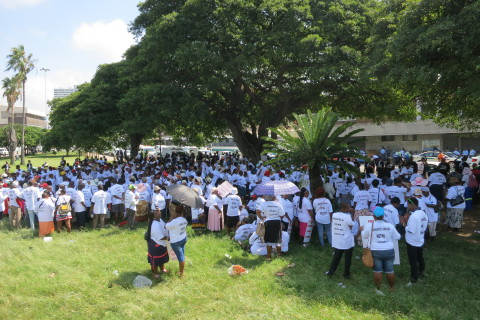 After weeks of preparation and community mobilization, thousands of shack dwellers gathered on Durban’s Dinuzulu Square early on Monday morning, 24 March 2014. As people arrived by foot, mini-bus taxi and on numerous busses, they were met by songs of protest sounding from an ever-growing crowd of shack dwellers affiliated to the Federation of the Urban Poor (FEDUP) and the Informal Settlement Network (ISN).  The mass of black and white t-shirts, placards, banners and cardboard signs bore powerful messages:

“Did you know the majority of people in eThekwini are still without title deeds?”

“No Upgrading without Us!”

These messages pointed to the purpose of the march: to hand over an agreement of co-operation to eThekwini Municipality which outlined a more inclusive, implementable and participatory partnership between the municipality and organized groups of shack dwellers affiliated to FEDUP and ISN.

From Dinuzulu Square to the City Hall

The date of the march coincided with national celebrations around Human Rights Day. Most shack dwellers in eThekwini municipality and the country, however, do not benefit tangibly from the achievement of human rights in South Africa. Land acquisition, housing, water and sanitation, refuse removal, access to electricity and informal settlement upgrading are urgent and daily recurring concerns. For shack dwellers in eThekwini municipality these issues are particularly expressed in the lack of a meaningful engagement between themselves and the municipality.  The march, therefore, aimed to set the scene for an inclusive and participatory working relationship. 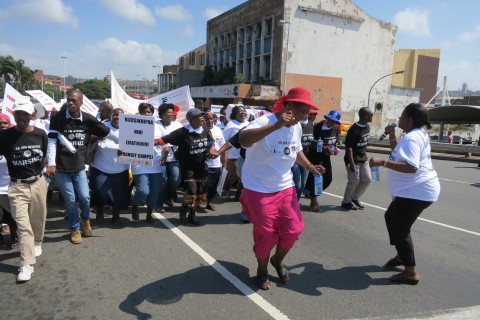 A crowd of about 2500 marchers set off from Dinuzulu Square at 11h00, marching in peaceful and powerful protest, singing and loud hailing slogans that express the hardships of life in informal settlements and the power of organised communities. In the mid-day heat of a bright summer’s day, the streets of Durban CBD came to a standstill as shopkeepers, pedestrians and on-lookers absorbed the lively and determined atmosphere. The slogan was clear: “Amandla, Imali Nolwazi, eish! Ayilumi Mayihlafuna” – Power is Money and Knowledge! Eish! You can’t bite while you are chewing! 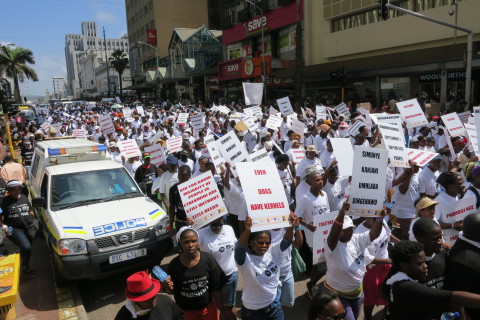 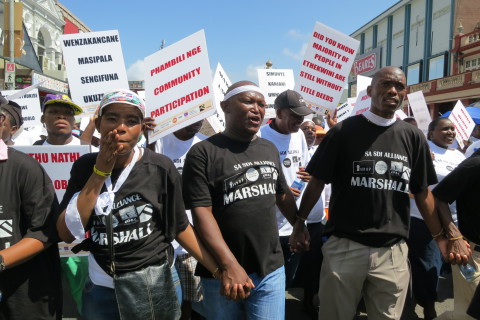 The alliance slogan directly speaks to the low response many urban poor communities receive from local municipalities.  ISN community leader Sifiso Nobani, explains that “We chose to march because this is the only language that the municipality understands. Roads will be closed and people and businesses will take notice of us.”

After 2km, the marchers, representing numerous informal settlement communities in eThekwini gathered in front of the City Hall to hand over the Agreement of Co-operation.

Towards an Agreement of Co-operation

The agreement was drafted as a response to some of the most pressing challenges faced by the urban poor in eThekwini. Sithembile Doncabe, FEDUP savings scheme leader, explains that “We are sick and tired of living in informal settlements. We are losing our dignity. We want to raise our dignity. We are citizens. We want houses. But they are not listening to us.”

Ma Mkhabela, provincial FEDUP coordinator adds, “There is some commitment from the municipality but they keep pulling back. When we meet in joint working groups once a month, municipality members are often missing. The provincial and national response is better. The problem is that our ‘partnership’ with the municipality is not a written one.”

“We don’t know anything about the municipality’s plans for upgrading our settlements. We need to be informed about time lines and planning. We want to be independent communities. We have rituals that help us, like enumerations that show that one shack does not equal one family. If we have a chance to submit this information to the municipality we can develop our country nicely, like the constitution says!” 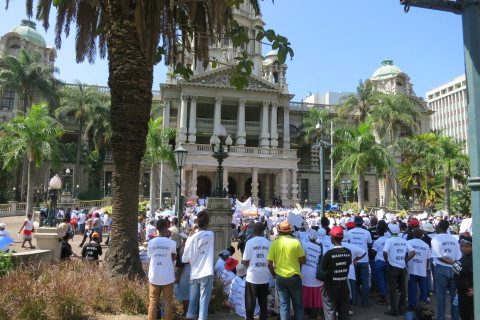 The co-operation agreement outlined these concerns in more detail. They relate to: a lack of updated facts and figures concerning the urban poor, a slow approach to land acquisition and assembly for informal settlements, inadequate delivery of basic services and disaster management, inadequate inclusion of the urban poor in municipal budgeting and planning processes, lack of municipal commitment to Joint Working Group structures to deal with uTshani Fund old debt and Pledge Housing implementation, limited social development, poverty alleviation, livelihood generation and nutritional programs as well as inadequate access to finance in funding community based upgrading projects. The agreement of co-operation also outlines the purpose and joint activities for future collaboration, emphasizing practical and implementable suggestions.

Several provincial alliance members shared their experiences around lobbying and mobilization with the marchers. Joe Nene, advisor to the Mayor, then joined national coordinators Rose Molokoane (FEDUP), Mzwanele Zulu and Patrick Magebhula (ISN) as the agreement was read out and handed over.

Mr. Nene received the agreement, emphasizing that he could not promise a signature but that it would be passed on to the mayoral office, which would respond within seven days.

As communities wait for a response from the municipality, Ma Mkhabela is clear, “We want to plan together with the municipality so that they know our priorities. They need to talk to us. There’s nothing for us without us. We want to know that we have agreed together.” 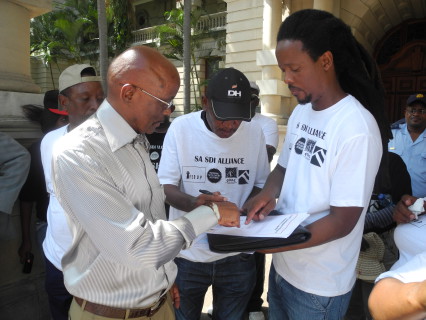