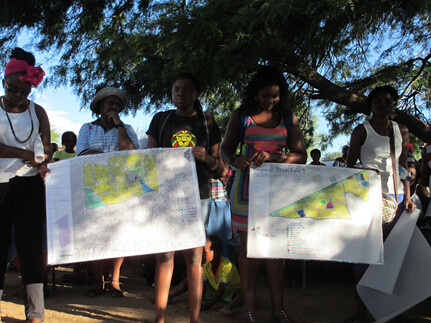 Following the first studio the community was anxious to embark on the second studio.  These studios have increased in importance considering the introduction of the Mass Housing initiative of the Government of Namibia; NHAG-SDFN proposed the participatory planning process of communities to be a cornerstone for informal settlement upgrading.  The second studio took place from 7 to 10 March 2014, involving the same group of town planning students from the Polytechnic of Namibia that participated in the first studio during September 2013, now doing layout planning as third year town planning students.  The learning during this studio was not limited to academic participants but included officials from the Ministry of Regional and Local Government, Housing and Rural Development, the Opuwo Mayor and Property Officer representing team members from the UN-Habitat Participatory Slum Upgrading Programme, a Community Development official from the City of Windhoek, and officials from the Gobabis Municipality.  Federation members from South Africa and all regions of Namibia, as well as a staff member from CORC with previous studio experiences in the network also participated in the weekend’s activities.

During the opening session of the second studio in the settlement, the students presented the proposed layout plans in the form of posters based on the findings of the site analysis.  The CEO of the Gobabis Municipality welcomed the participants, stressing the importance of settlement residents and the Municipality to start doing their homework to prepare the settlement for Mass Housing Programme that will benefit the settlement in the coming months.

’’The site analysis helped the community to look at improving the settlement.  We have to change the living standards in Freedom Square.  We wanted water, toilets and electricity and land.  During the feedback discussions with the municipality, it was indicated that water lines can be extended in the settlement.  Waste management was also an important issue that was identified by the residents.  Since the last studio, we have more people migrating into Freedom Square and settling with family members, but not a lot of new shacks are being built.” Rufus Mbathera, community participant as part of the Freedom Square overview of the previous studio during the opening session. 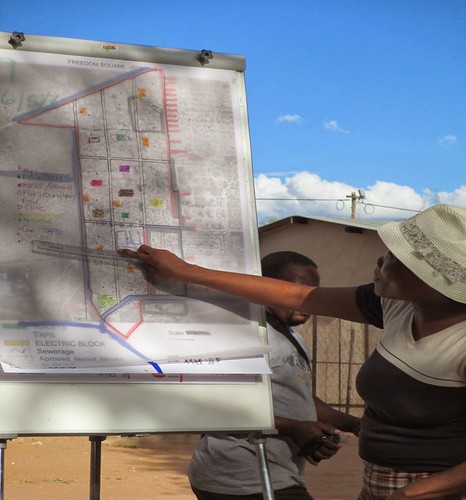 Thus for the design, participants had to take the current roads and water catchment areas into consideration.  During the site analysis of the first studio, community members discussed how the water runs southwards from Block 9, which is on higher ground, down to Block 1 and 2.  One of the barriers to the natural flow of rain water in the settlement was the weir stockpiled by the municipality to prevent cars from taking a shortcut through the area.  This restrained the natural flow of the water, causing the water to collect at the lower parts in Block 1.  This was identified as a huge problem as the area is occupied by households which are normally flooded during the rainy session.  During the previous studio the community members also talked about the seasonal migration that takes place within the settlement when houses relocate to avoid flooding and as it was very heavy rainy season the damage caused by the rain was evident and some households already relocated their structures. 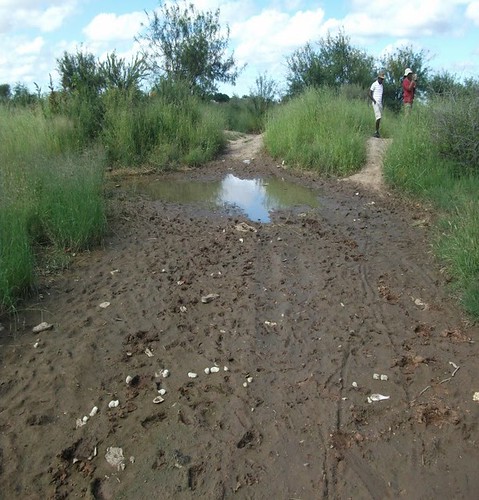 Maureen, a federation member from South African emphasised the importance for a proper layout: ‘’ambulances and police can get easier access into and out of the settlement if there are problems , this is important for safety and security of the residents” she said.

Sanitation options were explained by the Gobabis Community Development Officer, when sharing the Local Authority’s experience with alternative sanitation in Kanaan, the informal settlement bordering on the north-eastern side of Freedom Square.  Due to high water tables in the area and the absence of proper management the dry sanitation installed in this area was not found to be feasible.

The need for major access routes, social spaces and stormwater management and the needs of the elderly were discussed within the various smaller block groupings formed during the site analysis (first studio).  The initial exercise considered the entire settlement to establish a broader development framework.  Some groups were eager to verify of the structures in the blocks, whereby the need was emphasised to start focus on how the individual block design will fit into the larger settlement.  Community members indicated major access routes and roads, meeting areas, hazards and major flooding areas in the settlement.  Each group presented their outcomes on the bigger settlement map.

‘’We should put ourselves in the shoes of the elderly, they should point out the routes they use to go to town, clinic or to the shops, so that when the roads come, they maintain the current movement routes in the settlement.’’ Student participant

The location of shebeens in the settlement caused heated debates covering aspects of registration, ongoing noise through all hours of the day and night, while acknowledging it as a source of income and hence the need for suitable locations.

Reblocking and layouts continued on Sunday in the teams comprising community members, town planning students and professional staff according to the demarcated blocks in the settlement.  Due to threatening weather conditions it was decided to move the “community office under the tree” to the Epako community hall after lunch.  All was amazed that even more community members turned up to complete the designs for their blocks.  Each group presented its layout in preparation for presentation at the official closing session on the Monday morning. 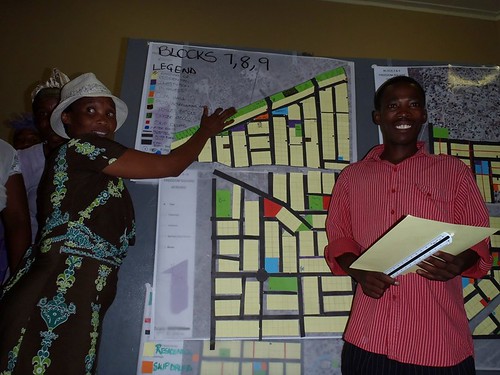 The second studio was closed on Monday in the presence of various dignitaries, including the Ambassador to Spain, Regional and Local Authority Councillors, while the keynote address of the Deputy Minister of Regional and Local Government, Housing and Rural Development was delivered by the Acting Director of Housing, Habitat and Technical Services Coordination.  The community presented their layouts and designs to the guests.

‘’You, as members of the community, are key in the successes of the programme, without you it would not be possible.  You are the ones that guide the process with the support of the implementing agencies.’’ Spanish Ambassador, Her Excellency Diaz Orejas

‘’It is important that we came together to do the planning as the community, but it is also important to share what we have learnt with the rest of the community, those not present at the meeting.’’ Charlie, Freedom Square community member

Sunday morning started off with a frenzy of discussions and demonstration of income generating projects, with the focus on bead making using paper and urban agriculture and planting of herbs.  Maureen informed participants of the many herbs that can be used for healing – mint in tea, cinnamon and lavender to help with sleep.  ‘’All this different types of herbs can be planted in a small space in your yard’’.

To learn more about SDI’s studios with AAPS you can attend our event at the World Urban Forum in Medellin, Colombia, “Planning Differenlty: Community Based Slum Upgrading Studios” on Wednesday 9 April from 2:00-4:00pm in the Yellow Pavilon, Room 12

Re-blocking is an element of incremental slum/informal settlement upgrading that supports area-based design and planning....