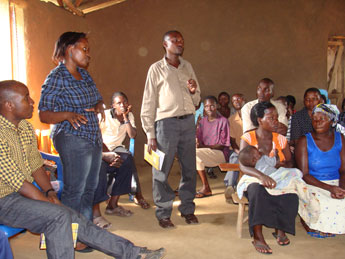 **Cross posted from The Age of Zinc**

Age of Zinc is proud to present the tenth instalment in a new memoir from the slums of Kampala, Uganda. Check back every week to catch the next part of the story!

When I was unable to go for the daily collections the women started loosing. So I said to myself that I couldn’t let this die because I felt it like it was part of me. I liked it and had mobilized over 300 people who were saving. I could move door to door and they were saving. After I had mobilize all these people I requested to get someone to assist me because I could not be moving around as much; I was losing my job at Owino. But the federation agreed that instead of getting another person to help me, they would pay me a little so I could continue. It was a challenge because they could not pay me what I was making in the market. Because they trusted me, I chose to continue. Trust is something you can’t just get. If people trust you that means you are an asset to them and you can’t lose. So I agreed and continued it for four consecutive months – I collected the savings. We then were able to start loaning.

Some people from ACTogether (the local support NGO) came to Kamwoyka and called a big meeting for all leaders in Kamwoyka settlement. I went because I was a local leader. At this meeting they introduced us to the savings culture and informed us what was involved. Afterwards, some of the leaders said, “No, these ones will eat your money!” Because a Dutch team and about three other organizations had come before and done something similar but had just eaten our money. But I stood up and said “Me, I’ll try this!” But my chairman said no and I told him “I will mobilize the women and they will come, I have them.” So we set up another meeting and I got thirteen women to come on the first day. These thirteen women started saving that day! We saved 13,000 shillings total. Each one saved 1,000 shillings. Those women also nominated me to be their collector at the beginning. So I was the secretary for the group and then they also asked me to be the collector. They had other leaders as well: the chairperson of the group, the treasurer, and the mobiliser. Committees were formed and each one of us had a role.

After that, we started mobilising. We mobilised our community and then our community mobilised another community. After we mobilising our community that’s when I started to go to different areas because I now knew what I was doing. I knew the challenges and the achievements. I could talk about something that I’m a part of and understood. Some of the challenges we faced were that when you started mobilizing the community some leaders would think you want to overtake them – we were a threat to them. They thought if this thing is successful, people would think that this is the person doing good work and when the elections come they will nominate this person instead. But after people see the benefits of their savings it’s up to them to decide. With us, we did not forced them to save. It is your own will and you were free to withdraw. We would also advise people that it is better to save for something big, not for daily food. If you’re saving for daily food you cannot save because you have to withdraw money everyday. It worked well and we were successful.

Soon after we started going for big meetings at the regional level. At that time we were still just in Kampala Central. We would go for meetings and that is where they recognized that I could maybe be put in a leadership position. They formed a profiling team and I was part of that team. In 2009 we moved into new areas. We visited Mbale to meet the municipality. At these meetings it was my job to record the minutes. This gave me a lot of strength because I had a lot of information and knew everything that was going on. It was during that period that the National Slum Dwellers decided that we needed a leadership structure. We set up a lot of meetings to discuss leadership structure and it took us almost two years to agree on the type of structure.

Once we had agreed on the structure we decided to have a meeting with all the different cities. By then we had mobilised the five regions of Kampala and the five secondary cities of Mbale, Arua, Jinja, Kabale, and Mbarara and each city was given the chance to elect one leader to the national team. Each city decided the person who they thought was good. For example, if we are looking at savings and Kampala Central was good at savings we would have Kampala Central give us someone who can oversee the savings committee. Jinja was very good at reports and auditing, so we looked for someone from Jinja who was doing audits to be on the national leadership team. This was the process we used for all the cities.