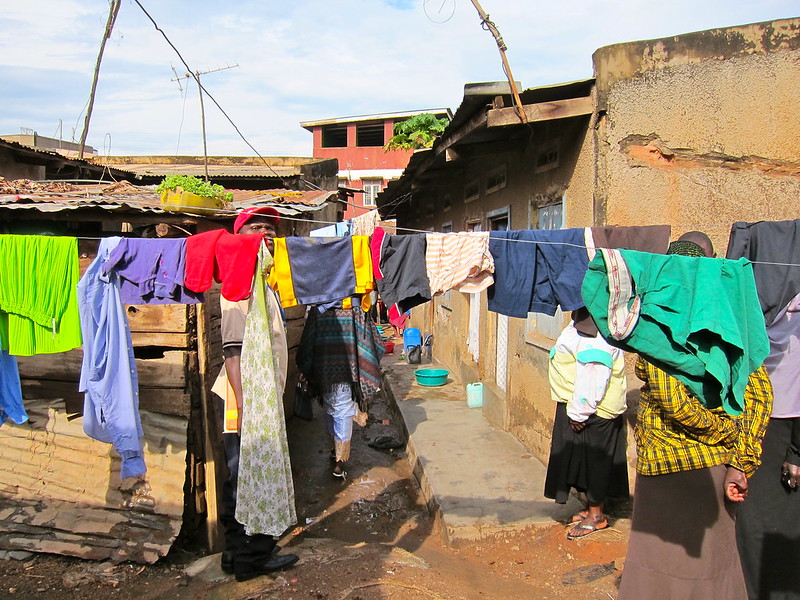 My husband happened to be in one meeting and saw what I was doing. I didn’t know he was there because I was really busy, moving up and down, coordinating this and that. When I saw him later, he said, “Ah! That’s why you have become very tired. You are working so hard, now I understand.” Now when I go back home I will find that he has prepared food and he does not complain. If I tell him that I didn’t eat lunch or don’t have money for transport, he will give me something. Then tomorrow when I get money I show him what I made and we plan together. We agreed to share and know show much we are spending and what we have left. That is the only way it will change us. Initially, he would get his money from his houses and I wouldn’t even know how he was spending it. But after joining the federation we are like twins. We are one. We think the same and we work together. We even share the same challenges. If I’m hurt he feels that I’m hurt because he knows that we have the same responsibilities.

One of the things I learned from the federation was to understand how to manage my home and my husband. I had almost lost him before I joined the federation, because we were not moving in the same line. After I joined the federation, he was the one looking for me then. I was not around. I was so busy and I would go back home occupied thinking about more things. I was thinking about what we were going to do next. I was not thinking about him leaving me or doing whatever – I was busy, I got another husband, the federation! He was even scared that I found another man. I told him the federation is my husband and I’m going to be with them for the rest of my life! He asked me who this federation was and I told him it’s the savings that we had started – that is the federation. He was also scared because I never complained and was always satisfied with what I had. I knew that what I had was what I needed to fit into my life and I didn’t have to look for anything else then.

I’m used to not eating money, so I could never eat it. Whatever money I was given I was saving it. Our house was in a swamp area and whenever it rained water was always coming in our house. I thought two of my children were going to die in the house because of the weather – it was so cold. The first money I saved was for improving the house. I told my husband that I have saved this amount of money and I beg you to add in more money. So we improved the house. We had to buy cement and sand to lift the house up because it was sinking. When it rains in the swamps people have to pile up more soil to bring the level up. When you bring the soil level up though the houses go down more. So we had to bring the house up too. You change one part today and another tomorrow – that’s how you fix it. So it wasn’t breaking down the house. We had two rooms. After finishing one room, we did the other room, and then we did the floor. It was perfect! It changed our lives. It took time for the children to get well but today they are well. I also suffered from asthma with the weather; it was very tough for me. But I succeeded in changing it! Even women were wondering how I managed, but I did. And now my husband was also talking and telling people that when your woman joins that federation it changes them, they start thinking. He was the one then mobilising the men. He also joined and was saving. He knew that what I was targeting was big so he had to work with me. I was also helping him to plan. He used to get money and just spend it like that – on pleasure and going out alone. I grew up without those luxuries so I didn’t mind them, all I want to be alive and make sure my children are alive. That’s what I want.