Municipal Forums for Kampala: “If not now, then when? If not us, then who?” 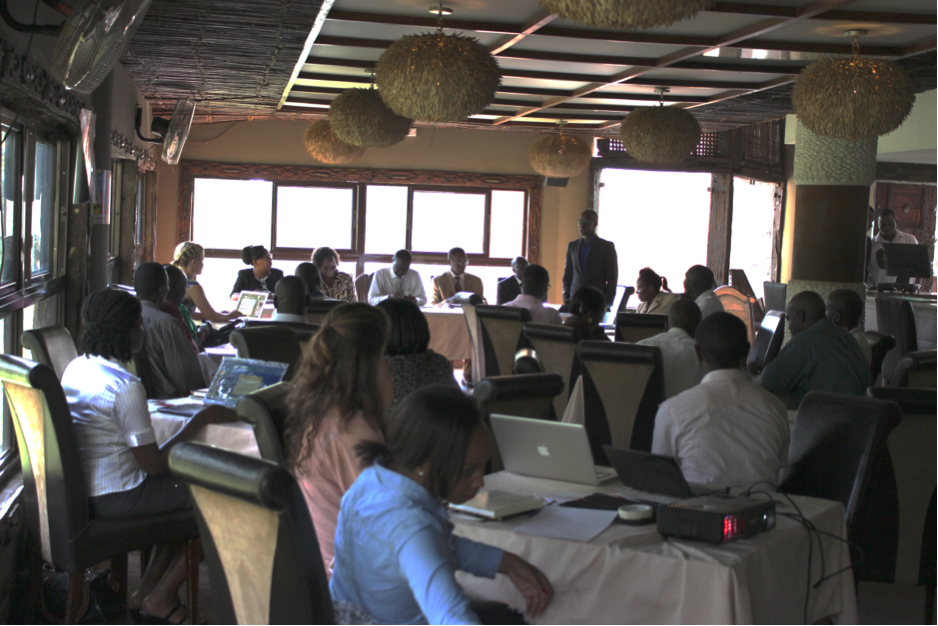 On the 29th of January 2014, ACTogether and the National Slum Dwellers Federation of Uganda (NSDFU) convened a breakfast meeting to discuss participatory governance in Kampala at Boda Boda, atop Garden City.  The breakfast brought together the mayors and town clerks of Kampala’s five divisions, top officials at KCCA, the Minister, Commissioners, and officials from the Ministry of Lands Housing and Urban Development, slum dwellers and NGOs. The breakfast was hosted by well-known Ugandan journalist, writer and analyst, Angelo Izama.

ACTogether and the NSDFU in partnership with Ministry of Lands, Housing and Urban Development has been supporting the institutionalization of forums under the TSUPU project (Transforming settlements of the Urban Poor in Uganda). The project, funded by Cities Alliance and the World Bank, spanned the municipalities of Jinja, Arua, Mbarara, Mbale and Kabale with an aim of empowering the municipalities and the communities therein to effectively and sustainably manage rapid urbanization. ACTogether and the NSDFU have been playing the role of organizing slum communities to participate meaningfully in such forums and linking internationally tested best practices through the Shack/Slum Dwellers International (SDI) network to inform local interventions.

It’s evident that Kampala, as Uganda’s largest urban center, is yet to manage the city’s unprecedented urbanization – evidenced by data that shows over 60% of Kampala residents are slum dwellers. The gap that is increasingly widening between city plans and community expectations presents an urgent need for a strategic intervention to address such planning challenges by setting up a platform for government and citizens to engage meaningfully on the development and implementation of city plans in order to promote more efficient and effective service delivery in the city.

The aim of instituting the forums in Kampala is to bridge the gap between planning and implementation as well as enhance the participation of residents (especially slum dwellers) in decision-making processes that affect them.  In addition, the forums will support KCCA in its efforts to create a vibrant, sustainable and attractive city with quality services.

The Minister of Lands, Housing and Urban Development – Honorable Daudi Migereko – opened the meeting by thanking his ministry for mainstreaming the idea of forums and supporting communities to generate local solutions to local challenges. He explained that the forums are a perfect space for creating “think tanks” that can generate innovative home-grown solutions. He suggested that they also serve as a space for reflection, stocktaking, identifying priorities, and discovering the resources within our midst. Critically, he informed the participants that in the urban centers where forums exist, project submissions to government have been much smoother, with the forums helping to mitigate against the bickering that stalls too many projects.

Next to speak as the Commissioner for Lands, Housing and Urban Development, Mr. Samuel Mabala, who explained that he came back from leave especially to take part in the breakfast, such is his commitment to sharing information on the role forums can play in urban management. He argued that the urban poor cannot be left out of the planning process and that it was the history of exclusion of the poor and failed upgrading projects that led the Ministry to launch the Transforming Settlements of the Urban Poor in Uganda (TSUPU) project in 2009.

His Worship, the Mayor of Nakawa (one of Kampala’s 5 divisions) presented next and explained that when he came to office in 2011, he was oriented by members of the National Slum Dwellers Federation of Uganda and the NGO ACTogether.  He came to understand just how widespread the issue of slums is and says he felt enlightened. He decided it was incumbent upon his division to engage the slum communities in order to improve the city. He emphasized the fact that in order to make strides in upgrading, partnerships are essential and that forums are en effective vehicle for promoting this.

Next, the Director of Gender and Community Services at Kampala Capital City Authority (KCCA), Madam Harriet Mudondo addressed the breakfast and lamented the lack of funds allocated to slum upgrading in Kampala and expressed hope that such forums could assist in the lobbying and advocacy required to change the status quo. She said that municipal forums can help to bridge the distrust and suspicion between the authority and the community and provide an opportunity to engage communities early in the development process in order to truly implement bottom-up planning.

Following the KCCA presentation a discussion proceeded in which participants sought clarification on certain issues and discussed the practicability of the forums.  At the conclusion of the discussion it was agreed that:

1)    A steering committee comprised of the mayors and town clerks of each division as well as a representative from KCCA’s Public and Corporate Affairs would be formed to take the process forward and draft the charters and form the committees required to operationalize the forums.

3)    ACToegther committed to facilitate the forums for the next 5 years. It is hoped that after that period the divisions and KCCA will appreciate the need for the forums and support their operations

“Don’t remove them from the slum, remove ...

Jockin Arputham has been fighting for the rights of slum dwellers for nearly 50 years....