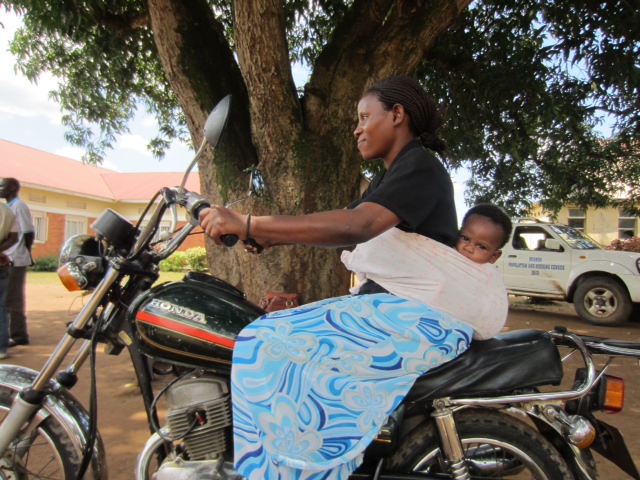 Age of Zinc is proud to present the twelfth installment in a new memoir from the slums of Kampala, Uganda. Check back every week to catch the next part of the story!

The first time I left Uganda was in 2010. I went to Nairobi for a savings meeting. It was my first time to go on a plane. Eh, it was not easy! My child was one month old so I had to move with him. When I reached the airport with the team I was told I needed documents for the child. It was time for the plane to leave, so the team told me that we are going and you will come by yourself once you get the documents. I said, “I can!” They said, “Will you come?” And I said, “I will come and I CAN!”

I went to the office where I was told to go for the documents and they directed me on what I had to do. I went to the nearby area to get photos of my child taken and then I filled out and submitted all the forms. I did everything quickly and I made it in time for the next flight! I went andI reached there by myself! Yes I did it! When I reached, I found the team and they were all surprised. They thought that maybe I couldn’t do it.

This had been my second chance. My first chance I was supposed to go to India but my passport was not ready. I said to myself it is not my time. My time was coming and now this was my time! When it came it had challenges, but I said, “No, today I can do this!”

The next trip was for federation strengthening in Ghana. We went to see how the Ghana federation was working – the structure, the projects, the saving groups, and the community. It was a good exchange. We learned a lot from Ghana and it helped us with our federation.At that time our structure was still new so the leaders went to see what they were doing in Ghana. We saw the Ashaiman housing project where the federation negotiated with the chiefs, whom had been on an exposure exchange to India, which learned how the Indian federation worked with its government to get land. We also took a tour in Old Fadama, a big settlement, and saw how the slums are set up and how they managed the eviction threat. All of this was to strengthen the leaders, because in Uganda we never had that structure before. We wanted to see what the role of the leaders is and how do they work.

From Ghana we went to Malawi. That exchange was also about federation leadership. We went to see the different projects and we visited different groups to learn what they were doing. We learned how their saving schemes operate and how their projects work. With these projects they would agree that when they made clothes (it was a tailoring group) one person would take them to the market and sell and then bring back all sales. They were doing it to revolve funds. Everyone would go to the market and report. Another team sold vegetables. They would all agree and sell them as a team in the market. Their work was really teamwork in the saving schemes and their savings were always good. After selling they would each get some money and everyone could save. After that we came back to Uganda and had learned what to do to.

Art in the Service of Transformation. Transfo ...

Earlier this year SDI co-produced a film about life in Uganda's slums, called The Boda Boda...