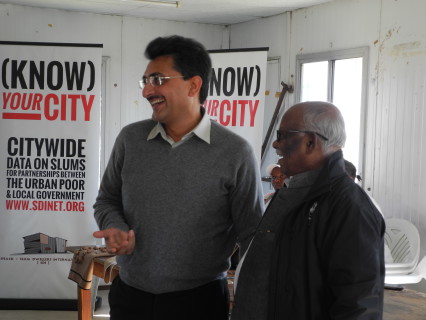 Jockin Arputham, president of Shack / Slum Dwellers International (SDI) received a warm welcome from the South African Alliance in Cape Town yesterday on the last of his four-day visit. As a long-standing, much-valued friend of the Alliance he spent the day with community leaders in Khayelitsha and with representatives of the City of Cape Town and Western Cape Province.  Jockin spoke about the power of savings and the Indian Alliance’s partnership with the Municipality of Greater Mumbai. In this context, Jockin was accompanied by Rajiv Jalota, the Additional Municipal Commissioner for Projects in Greater Mumbai Municipality. 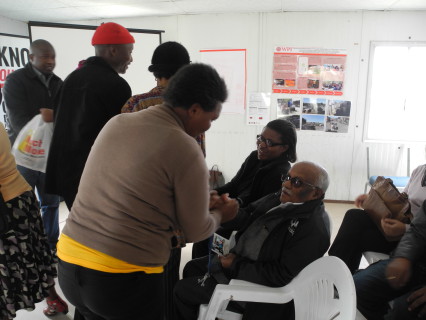 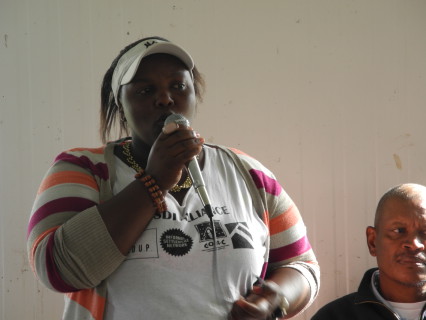 The Informal Settlement Network (ISN) has mobilised and profiled several settlements in Khayelitsha that are set to proceed on water, sanitation, drainage, re-blocking and community facility projects.  Jockin’s visit linked Khayelitsha’s community leaders – many of whom are fairly new to ISN and SDI processes – to the broader context of the South African Alliance and SDI as a global network.

National coordinators of the South African Alliance’s two social movements, Patrick Maghebhula (ISN) and Rose Molokoane (FEDUP) welcomed Jockin by speaking about the Alliance’s history with the Indian Alliance. They referred to the South African slogan – Amandla Imali Nolwazi: Power is Money and Knowledge – and its roots in the relationship with India.

“This slogan started influencing me after we went to India (in 1991). We shared ideas around democracy with the Indians. We saw that after 40 years of democracy millions of people in India were extremely poor. We realized that if you sit around and wait for democracy it will come…but it will come with its own laws that might not cater for you. We need to do something to translate these laws to our own life. And so we learnt the experience of self-reliance from the Indians. We need to drive our own lives – and we do that with savings. This is how relationships with government were formed in India. Our savings and our information give us power to influence laws. We know, that yes, we may be poor, but we are not hopeless“ 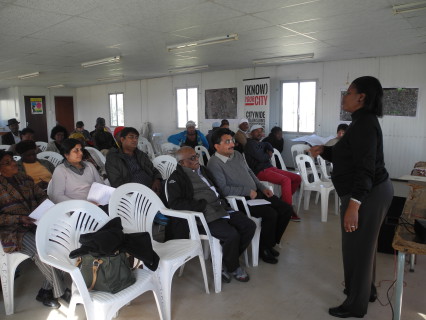 In the keynote address, Jockin emphasised that

“Savings are a life line. We talk about savings the whole time because money is what speaks.  But when you collect money – door to door – you also collect information. When you have information you can plan action and if you act, something will happen. This is why money and information guarantee us power.  We need to think about how to support ourselves”

As 40 – 50 % of Mumbai’s population – 19 million people – lives in slums, many millions do not have access to toilets. In fact, the ratio translates to about 1 toilet for every 800 people.  The NSDF has therefore been working together with Mr Jalota and the Municipality to construct community planned and -owned toilet facilities. This experience, Mr Jalota explained, would help to develop more policies for Greater Mumbai.

Jockin founded the National Slum Dwellers Federation of India (NSDF) in the 1970s. Often referred to as the “grandfather” of the global slum dwellers movement, Jockin was educated by the slums, living on the streets for much of his childhood with no formal education. For more than 30 years, Jockin has worked in slums and shantytowns throughout India and around the world. After working as a carpenter in Mumbai, he became involved in organising the community where he lived and worked (Reference). He helped found SDI and has been awarded many prestigious global awards, most recently the Skoll Foundation award for social entrepreneurship. On behalf of SDI Jockin has also been nominated for the Nobel Peace Prize. 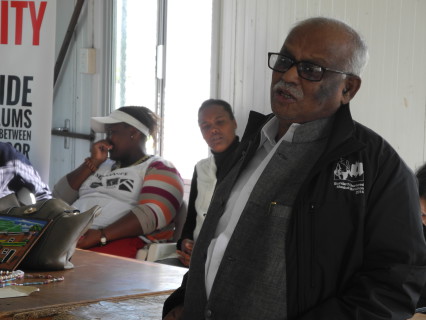