A Paucity of Pictures Tell a Story

I have only ever seen two pictures of Patrick and myself – and then only in recent weeks as Patrick’s death has triggered a deluge of eulogies and dredged up old photographs from across the globe.

The first photo was taken in 1995 in Patrick’s settlement of Piesang River, Inanda. 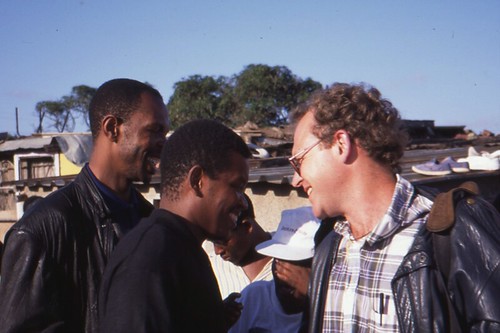 The picture captures a triumphant moment for us. Long before it became politically fashionable we had combined our wits and capacities to get the Minister of Land Affairs, Derek Hanekom to spend a night in a shack – Patrick’s shack. But the strategy did not end with the spectacle of a Minister making media mileage out a night of staged inconvenience. This was all part of what became our trademark – militant negotiations with state institutions. This choreographed event translated into the formation of a joint working committee comprising shack dwellers and Ministerial officials that enabled the transfer of more than 350 hectares of urban land to South Africa’s homeless poor.

The next photo was taken 17 years later, again in Piesang River. 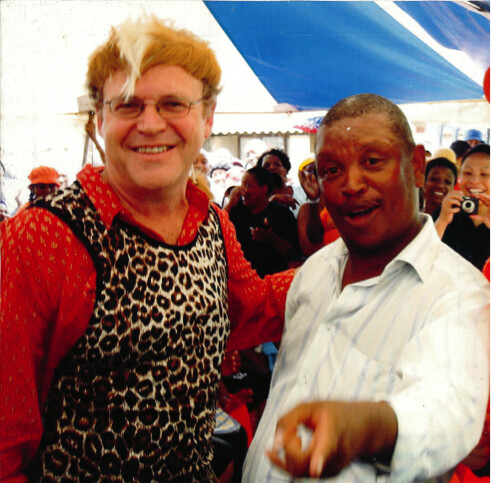 Whereas the earlier picture hints at the emotional bond between close friends sharing a common political vision, the later picture gives an insight into our capacity to stage-manage political engagements and to combine the very serious work of economic and political redistribution with pantomime and farce. Patrick, whose life was filled with tragedy and whose heart was filled with pain, was fully aware of the fact that our work was enormously important and overwhelmingly difficult, which is precisely why he always made sure that we never took ourselves seriously.

I read a few comments about Patrick’s life and death today that are worth repeating.

One person, reading about Patrick, writes: “A hero indeed. How did I not know about him before he died? Why was I not taught about him at school or university? Why did the media not discuss his views and actions while he lived?”

Another person responds: “Because that is how it is when a true leader rises. He stands with his people not above them. These are the stories that remain untold. At least this legacy has not left with him. Patrick was also humble …”

And then first person adds: I know. But this makes me sad. I’m sad that I never got to meet him, engage with his writings, consider whether he was right, get persuaded or not, perhaps try to help out. I feel bereft of a wisdom that is now gone. I keep thinking how often does this happen? How often do I as a young person, miss the opportunity to gain from the wisdom of others because they are not rich enough, white enough, male enough, schooled enough?”

For 23 years Patrick and I saw one another at least once a month – often once a week. We spoke at length on the telephone almost every single day. I had the wonderful privilege of knowing this special man as a friend and a brother, a co-conspirator working tirelessly, cleverly, playfully to make this world a better, more just and humane place. I cannot count the shack settlements we visited to meet with informal dwellers, to listen, to share ideas and plan ways to give voice to the voiceless, land to the landless, hope to the hopeless. In every province and every major city in South Africa. In Namibia, Zimbabwe, Kenya, Brazil, Indonesia, Cambodia, Thailand.

And yet there seem to be no other photograph to capture and commemorate this most extraordinary friendship. Why? Because our friendship and our comradeship was it was meant to be – a coming together of two people whose combined capacities opened opportunities infinitely greater than we ever imagined. But we never did it for fame, for the limelight, for the photo opportunity, the financial windfall or the seat in parliament. This disinterest, no this disdain, for power and self-promotion was fundamental to our vision and our practice. I search through literature and through history to find the equivalent to this friendship, and here and there I get glimpses. Sometimes he played Queeqeg to my Ishmael. At other times I played Woods to his Biko.

I am deeply moved by the words of the young man I quote above. We are all bereft of a wisdom that is now gone, but as long as I continue to breath, the lessons to be drawn from the project for transformation that Patrick and I applied every day, and his wisdom and his remarkable achievements, will not disappear.

It is left to me now to be Barney Simon to his Dugmore Boetie; to be Horatio to his Hamlet. A noble heart has cracked and it is left to me to “speak to the yet unknowing world how these things came about.”

Today we also want to recognise an outstanding, humble man who helped us shape our policies and understand how people who live in slum conditions are not victims, that they...