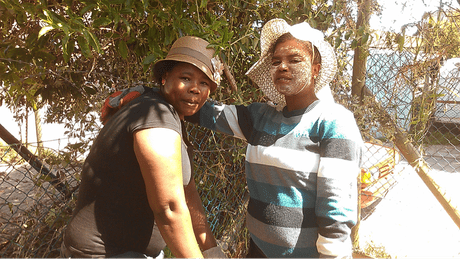 Nandipha & Noziphiwo team up to expand the community garden at the Masiphumelele Soup Kitchen.

A national industry which offers public-sector employment to 50,000 economically disadvantaged beneficiaries should have a profound impact on the livelihoods of poor informal settlement dwellers. The Department of Environmental Affairs Working for Water Program (WfW) is therefore a primary target for Community Organisation Resource Centre’s (CORC) engagement of the state. In 2002, CORC managed 25 teams in all nine provinces to work at a staffing model which sustainably supports employees. However, due to the under-budgeted nature of the program, the majority of these teams disintegrated. The only remaining teams were privately led rather than collective in structure, with profits directed primarily to the supervisory contractor, rather than the labourers. Currently, most WfW teams operate under this model, under which the vast majority of beneficiaries earn minimal wages and secondary benefits of social development and training opportunities. This year, CORC assembled a new team in the Western Cape based on an ambitious project: to clear neglected private areas on demanding terrain bordering the Province’s most-visited nature reserve. This effort in collaboration with nearby private landowners attracted the attention of WfW once more. Affected communities near the reserve have limited employment opportunities due to their isolation and have minimal collaboration with the Informal Settler’s Network (ISN) and Federation of the Urban Poor (FEDUP). With the help of existing contacts at Non-Profit organisations in the settlements of Masiphumelele, team leaders were drawn from youth SDI-employees from Phillipi. Young women from Masiphumelele in the South Cape Peninsula were hired as general workers with the potential for promotion conditional with training. This report follows their story.

Ayanda The seeds of this project started when Ayanda Magqaza was a sprightly fifteen-year-old. He would leave his home in Phillipi to stay and work in the South Peninsula for the weekend. Agile and flexible, Ayanda quickly learned to clamber over the boulders and climb the gum trees at Castle Rock. Local landowners would hire him, first to help in the garden, and eventually to man a chainsaw alone in the depths of the forest all day long. As a CORC employee, Ayanda was the first person the project leaders called to begin working on the mountain, with the hopes that he would soon be able to lead an entire team to assist him. Within a few months the imagined team materialized, largely due to his illustrative, personal and persuasive communication abilities. When project management was absent for two months in mid-winter, Ayanda took the helm and continued to recruit new team members, coordinate logistics for certified training sessions, and lead the team to clear vegetation on the mountain slopes. 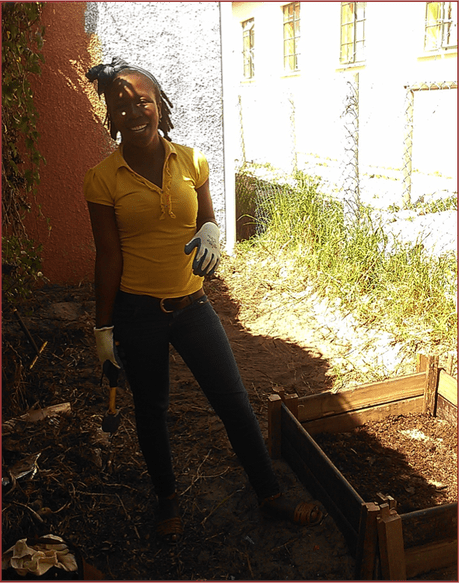 Anela was an unpaid volunteer at the Masiphumelele Pink House when she started with CORC in June. Now she earns a wage on the CORC team, partly to help restore the Pink House community garden.

Anela All roads in Masiphumelele lead past the Pink House, a community services center managed by Catholic Welfare Development (CWD). While CORC was recruiting for the team, CWD opened their doors and provided a number of applicants. Most were men, with some construction experience; the women seemed to be looking for a desk or service job, something with a roof. But Anela Dlulane stood out, highly recommended by CWD as a lead volunteer there. During the first trial on the mountain, when the slackers stayed back to chat and move slowly, Anela kept pace with the young guys as they stacked body-length branches along the hillside. It was hard work compared to her previous job as a typist at the Department of Transport, but Anela stuck with it, with the hopes of one day fulfilling an administrative role for the CORC team.

Roger Prior to joining the team, most of Roger Janse’s days were indoors at the Slum Dweller International (SDI) offices. The office valued his polyglot fluency in Cape Town’s three main languages, but his studies were at a standstill and he was not sure how to advance his career.  He aspired to obtain his Driver’s License and begin work as a driver for SDI, but despite repeated courses, he did not pass the test. Roger had helped Ayanda in the South Peninsula before and decided to try it again. The mountain revealed itself to be an exciting place, satisfying his interest in wildlife like puff adders and cape cobras. Roger began work as a stacker, but by the end of winter had attained his Chainaw Operator’s certificate, and qualified for three other courses. Just two months later he held his long-awaited Driver’s License in his hands, then doggedly pursued an additional commercial license. Due to his determination, the team now depends on Roger in his role of back-up driver to transport them and their equipment from home to work. 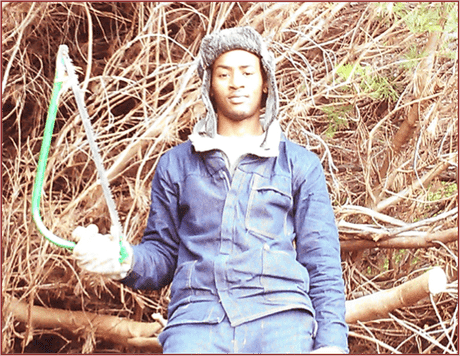 Sinjuvo She came prepared. She brought with her a record of several years of herbicide applicator experience, a list of contacts from her old team, and even wore here official yellow WfW shirt to work. At some point she had left her previous WfW team and her skills and training were left idle until she crossed paths with the SA SDI Alliance in Masiphumelele. Gudiswa Mathu may be older than the average worker, but her experience helps her know how best to contribute. When the team was still in its early stages, struggling to find women who were prepared to do labour-intensive tasks day in and day out, Gudiswa knew who to call. Within two weeks, the team ratio was balanced in favor of the better gender, 7 to 4, surpassing WfW national standards for female-to-male hiring ratios.

Sakhe With only his secondary school certificate in hand, he set out for Cape Town from the Eastern Cape. After growing up there and doing his schooling there, Sakhekile Nkohli contacted the few family members and friends he had in Cape Town and moved into Masiphumelele. He found infrequent work, mostly occasional construction jobs. But as a young worker his resume and contacts were not competitive. When given the chance on the mountain, Sakhe demonstrated what made him stand out. His fearlessness and drive earned him the position as the only team member without a previous relationship with SDI to receive and qualify for chainsaw training. With Siya or Ayanda present, Sakhe is a dependable assistant and when a more experienced manager is unavailable, he takes the helm. 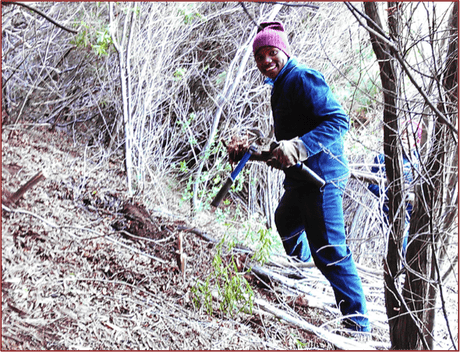 Bracing himself on the steep slopes, Sakhe clears an area for the Chainsaw Operator to work, a role for which he now is also qualified as a result of training on the team

Liso She may have the smallest shoe size, but in many ways she makes the biggest contribution. After 6 years of working on alien clearing teams, Liso Jentile offers the most insight and thoughtfulness of any team member. Her years of experience include training as chainsaw operator, which offsets the gender balance of mostly men leading with chainsaws and women following while stacking branches. Most of the time, she is quiet, and does not participate in the teatime chatter. But when the team reaches a new situation and is uncertain how to proceed, people turn to Liso for well-seasoned advice. Her thinking abilities make her a role model for other women on the team and a prime candidate for promotion to a leadership role.

Siya Initially, he was busy in the office and didn’t take the offer. Afterall, his family was in Philippi, including his newborn son. Weekdays in isolated Castle Rock sounded lonesome. And after more than a decade of chainsaw work without any career prospects, the idea of working on the mountain did not excite him. But when the opportunity to join Ayanda at a chainsaw operator training arose, Siyasanga Hermanus got involved. Within three weeks he had a team working to help him stack – a luxury after the years of working on the mountain alone. With his firm manner and steadfast approach, Siya earned his team’s trust. Now he, like Ayanda, is building up skills to eventually contract his own team. But while most WfW contractors supervise from the sidelines, Siya will remain right where he is. The only way to make sure the work gets done, he says, is to be part of the team. He won’t be letting go of his chainsaw anytime soon. 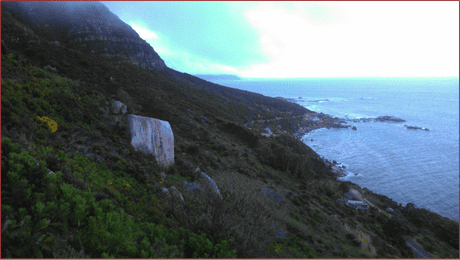 It is a fragile system, but it holds together – a web of life that benefits from its interdependent nature as much as it is defrayed by internal competition. Like the risk of wildfire on the mountain, our team confronts challenges to their health and safety every day. Competition is no stranger, and they confront one another when they disagree on an approach to an issue. Like the heat of summer, they feel it on their table at home when funding dries up and bonuses are no longer available. And when in need of assistance, if it is not offered with personal consideration, some team members may be flooded with advantages while others fail to gain ground.

Despite these challenges, the team is resilient. They depend on one another because they know that they can fell more trees working together than alone. A communicator like Ayanda can help advocate for more contracts together than the others could do alone. A veteran like Liso can help plan savings for their future together better than the others could do alone. And with perseverance, they can build a collective company with the full contribution of each team member.

While one person cleans a chainsaw, another takes inventory of the day’s supplies. A Health and Safety Officer takes note of the appearance of the deforested slopes after a day’s work while a First Aid Officer records that day’s participation of each individual. One person measures herbicide concentrations, while another speaks publicly about the value to biodiversity of their work. Each worker has their role and is valued as an essential member of the team.

Over 35,000 South Africans are funded by the Department of Environmental Affairs to clear invasive alien vegetation in South Africa. The vast majority of them work under a private contractor. While project funds should be directed to workers, this system incentivizes the contractor to increase staff productivity to their own benefit. CORC’s team structure provides a new model, one that serves the poor populations that it is meant to support. Through this program, CORC has the opportunity to affect livelihoods across the country. It begins with the collective.

This collective has a new opportunity. In the South Cape Peninsula, a few mountain slopes dipping into the sea appear too difficult, too costly to clear. Without professional training for mountain slopes, this team has confronted Castle Rock. In doing so, they have proven their worth as recipients of intermediate training required to clear such lands safely. As an intermediate team in high demand, they may prove financially sustainable while maintaining the collective structure that can help negotiate the team members into more established careers. As a self-sustaining collective they may be able to operate independently throughout the Western Cape, and can train other teams in other provinces. A handful of youth from the South Peninsula has the chance to transition from labourers to leaders, not only in their industry, but in their communities.

•           Land clearing for alternate use at Desmond Tutu Youth Centre

•           Renewal of relationship with national government after >12 yrs dormant

3. Site survey and mapping of biological resources and quantification of working conditions