Know Your Settlement/Know Your City: Slum Dwellers Federation of Namibia and the Community Land Information Programme (CLIP): Part I 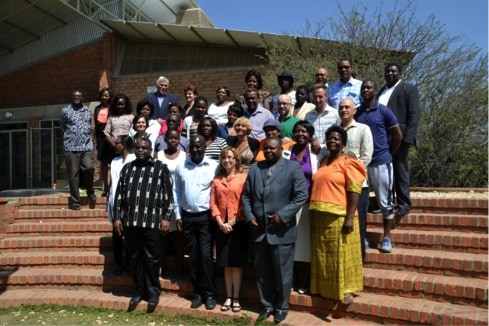 By Royal Mabakeng and Braam Harris for SDFN and NHAG with Anni Beukes, SDI Secretariat

“As someone who lives in a shack, it is my responsibility to do this work and take it step by step. You don’t get all the training you need, you learn as you go.” Olga//Oases (SDFN and CLIP Facilitator from the Erongo Region, Namibia)

On the morning of 24 September 2014 there was much nervous excitement at the Habitat Resource Centre in Windhoek, Namibia. The small group of women who made their way up the sandy road came from almost all corners of this vast and sparsely populated country. We met them just before the descent to the conference venue and having been introduced to their sisters from Zimbabwe, Luciah and Mohlin, they broke out in spontaneous song and dance, filling the warming morning air with sound and dust. This is a scene endemic to any space where women of the international federation of Shack/Slum Dwellers International meet. Despite the language differences in the songs, the message is always the same and instantly and warmly understood: “we are together, we are one”. Even her Excellency, Maria del Carmen Diez Orejas, Spanish Ambassador to Namibia was enveloped in the dancing as she came by. After all, today there was much to celebrate. The Shack Dwellers Federation of Namibia (SDFN), together with Namibia Housing Action Group (NHAG) was presenting the outcomes and outputs of a 4 year long community-led data collection process. Since October 2010 this work has been supported by the Alliance for Solidarity and funded by the Spanish Agency for International Cooperation and Development.

The Community Land Information Programme, or CLIP as it is commonly known, was initiated by the Shack Dwellers Federation of Namibia (SDFN) and supported by the Namibia Housing Action Group (NHAG), in partnership with informal settlement communities, Local, Regional and National Authorities in Namibia. This programme aimed to facilitate a process whereby informal settlement communities and local authorities participate in the understanding of the circumstances and community needs in informal settlements to enable development planning and sustainable solutions for securing land and access to basic services. Since the early nineties SDFN-NHAG collected socio-economic data in various locations in Namibia. Gobabis Municipality in the east of the country and the City of Windhoek were the historic loci of activity where the federation and NHAG supported the development of databases and registration of households in informal shelters and settlements. These databases were premised on community-led and collected data. Nationally though, there remained a dearth of grounded and accurate information on informal settlements as recognised by the Secure Land Tenure Committee of the National Habitat Committee under the Ministry of Regional and Local Government, Housing and Rural Development and the SDFN and NHAG by the middle of the previous decade. The lack of basic information needed by Local and Regional Authorities to identify the scope of land requirements and needs in urban areas remained a serious problem. At the National Housing Conference in 2006, the process and method of the SDFN and NHAG was adopted and nationalised resulting in the Community Land Information Programme (CLIP). This process started with the profiling of all the informal settlements in Namibia. 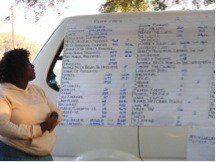 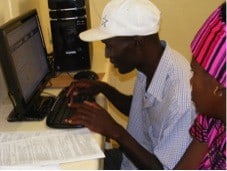 During these 4 years of the second phase of the CLIP process, more than 250 activities took place. From socio-economic data collection at the household level, mapping of settlements and structures, digitization and analysis of this data, to the feedback of findings and results, always through regional, national and international exchanges between CLIP Teams. Discussions and negotiations for upgrading options in four pilot towns, namely Gobabis, Grootfontein, Omaruru and Windhoek were also undertaken. For the first time community members from informal settlements sat together with local authorities to discuss upgrading options and improvements for their settlements based on the data they collected and the prioritised needs identifed through this process. In March 2014 the first Reblocking Community Studio took place in Freedom Square informal settlement, in the town of Gobabis. Community members and Local Authorities worked together on the design of a new layout for Freedom Square, with the support of the Polytechnic of Namibia, SDI and representatives of other Namibian towns.

In recognition that data collection is only part and the beginning of the process of negotiation and participation in prioritised development for both the community and their local city authorities, an official from the Omaruru town council likened CLIP to “klip” – which is a local word for stone or rock – only the first and yet foundation piece of building a house. Another likened it to the link between commutnites and their governments.

A great number of Namibians, half a million people, according to the CLIP data, are living in informal settlements as a consequence of the migration to urban areas in search of better living conditions. Community-led data collection complement the efforts of local and national government in generating the crucial data that is necessary to assess the true situation of informal settlements and provide a foundation for collaborative planning of urban areas. The results and processes of programmes like CLIP take governments and communities beyond awareness to understanding and action.