Those Who Tell the Stories Rule the World 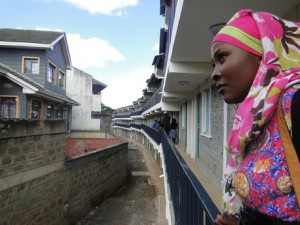 In a recent trip to SDI’s Kenya affiliate I was fortunate enough to meet a group of young federation members making their entry into the world of blogging. The youth came from the slums in which Muungano wa Wanavijiji organizes. Below are the highlights of their first blogs about a topic of interest to them from their settlements. I would hazard a guess that they might just be the most interesting blogs you’ve read all week. Click on the titles to read the full blog and please send comments and questions to the youth if you connect with their stories.

If those who tell the stories indeed rule the world then I can only hope these storytellers continue to make their voices heard.

“Some of the resident who live near the river were left homeless after their houses were swept away by the raging water, carrying with it goats and cows of a big business man called Wachira in the slum who supplies the residents with the milk. Drunkards became sober and tried their very best to reach their homes as soon as the rain subsided. A couple of residents found themselves floating on water as if they were in a Jacuzzi while a sleep, they had to be rescued by some youths and taken to nearby clinics for check up.”

In “Potato Wars” Asha Ali from Machakos narrated the chaotic – and potentially very dangerous – scene she witnessed at marketplace in her settlement.

“… to my shock, it wasn’t the sellers who were throwing their money away; it was the county inspectorate ‘officers’ who were actually destroying food, sustenance for mankind. All this for what: just because the said potatoes were not meant to be sold in 90kg quantity, in whatever measurements that they were meted in, by small number of retailers. The market was exclusively meant for wholesale only. This was from a by-law, enacted by the hoodlums who like to be referred to as ‘Honorable’, otherwise known as MCAs, in order to generate ‘more revenue’, by denying retailers access to the larger portion of the town market.

… Unnecessary humiliation and injury to man is not the way to handle internal disputes and grievances. We are not back in the Stone Age when all was needed to quell a mob was a whack to the head and the unlawful detention of a few… The population of today is craftier, more tenacious, and to a logic-defying extreme, more violent, if need be.”

Mary Munyiva, a youth member from Kahawa-Soweto, conveys the settlement’s struggles with alcoholism and drug-abuse in a piece called “A Small Heaven or Hell?”

“Sometimes life seems to be hopeless when someone lives in a slum. But on the other hand “A VILLAGE OF HAPPINESS “is part of a settlement in Kahawa Soweto. Most of the people here are ever drunkard, drug addicts, and commercial sex workers among others. Marital status contract is just for the next few seconds … It has deteriorated health factors in the fact that most people are infected with HIV/TB yet they transmit it day and night. Their physical appearance looks as if they are age mates of the first president of Kenya and the most challenging factor is death almost every month.”

Sophia Khamis, a young mother from Machakos, tells her inspiring personal story in a blog called “A Call to Young Mothers.”

“Being a young mother from slums having left college early and having no experience in anything it was quite a challenge to start something up! I was in this saving scheme in Mjini Machakos having being forced by my mum to join, I not seeing any significance in it … I took a loan from my group and started small business selling beauty products something I love doing, and today my business is my testimony.  So to all young mothers out there life isn’t going to change by knocking your heels together change starts from us don’t give up there is hope out there no body said its going to be easy but believe me when I say there is something for everyone you got to work for it.”

“Crime in Mathare”, written by Kate Wanjiru, tells the story of her slum, the second largest in Kenya. Plagued by crime, Kate explores the impact on youth.

“Mathare is home to some of the toughest criminal gangs in Nairobi whereby many youths steal and engage in crime to make a living … Many youths have lost their lives, in one year fifty youths were killed, but it was so painful to see the police shooting because they would find the youths holding illegal assembly   eg ‘base’ and ask them to kneel down and start shooting in front of their parents and the community, this was a torture because before they killed them they would beat them up. The youths of Mathare transformed after the introduction of jobs by the government for the youths ‘kazi kwa vijana’ and through educational seminars. In my hood, Bondeni there are many youths that have transformed. I got a chance to interview Kim who told me, ‘‘I was one of worst criminals. I used to recruit young youths and taught them how to use guns and stealing from people especially hijacking cars but thanks God because I have now changed.’’ Kim is now working with nongovernmental organizations like Muungano wa Bondeni  to  help other youths change. Kim is working in one of the Muungano developed toilets projects and saves like other members.”

Milka Njeri, from Huruma, writes about the challenges faced by women in her settlement.  In “Giving Hope to Hopeless” she tells the moving story of H-town, a group of young girls, mothers and teenage mums.

“I spoke to Nancy Njoki, a mentor and a founder member of H-town group, “As we grew up gender based violence has been a way of life among young women, but we as h-town we would like to change this belief and help reduce cases of rape and violence women.” In a recent event, one of their members was arrested, taken to court and jailed. She is currently serving a jail term at the Langata women prison for accidentally murdering her boyfriend whom it is alleged wanted to rape her.”

Peris Saleh of Mukuru has shared two pieces. In “Just a Call” he describes how he became involved with Muungano, ending the piece with a call to action to other youth to get involved in their communities. In the second piece, “Eviction Mirror!” he gives a gripping account of the Mukuru residents’ fight against evictions.

“Tell those who are asleep to wake up all the children, to make as much noise as they can! We don’t recognise those people! Who are they?

“Don’t destroy! Have mercy on us.”

“You must go! Chirongo must go! Let’s join hands as a community to prevent this Caterpillar from destroying our houses.” (All mothers to stand in front of the Caterpillar together with their children).

“Let’s go and lie down in front of the caterpillar to let it first pass on us before it reaches to our houses.” (We arrange ourselves and the caterpillar went away; it didn’t dare to step on anyone.)