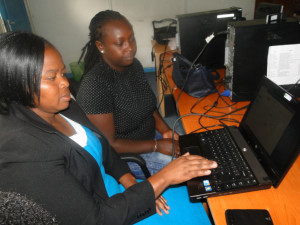 **This post was originally published on the Muungano blog**

Born in an informal settlement and brought up in yet another informal slum in Nairobi, in itself sounds catastrophic. Having been born in Korogocho did not castigate me to a life of poverty; I had a vision to lead a normal life. Raised in a family of four girls and four boys life was not that promising but I learned to live a simple life.

In a country where half of the population lives in urban areas, one would expect pockets of slums strewn across almost every neighbourhood with high population densities. The picture is not a far cry from reality, at least in the context of Korogocho. But even if the country has seen incredible growth over the years, there is hope things can turn around.

Being a single mother, I joined Muungano in 2001 in Korogocho. By then I used to save five shillings daily. In 2003 I moved from Korogocho to Huruma and later joined ex-Grogon saving scheme and also as an assistant secretary for ex-Grogon land and housing co-operative society with no papers, not even attending a computer class I was a among ten youths in eastern region to undergo a data capturing training in using Microsoft Access and Excel. I later on learnt data verification , since then I have learnt more and used these skills to train my fellow slum dwellers, all this achievement needed passion and patience.

My first baby steps came earlier than I expected when I started working on the Kambi Moto slum upgrading project, seven years ago in Huruma, Nairobi. The challenges surrounding the community momentum to advocate for the re-allocation of land from the Nairobi City Council back in the day to demonstrate a community led slum upgrading concept, may have differed from other informal settlements such as Kibera, or Mathare, but seldom do we as humans of informal settlements get the feeling of hopelessness in the slum communities.

The urban poor in our great country need to be empowered, and solutions have to be designed by them. Community organization, a difficult yet key element to successful Kambi Moto slum upgrading, was successfully carried out, with communities taking mostly the lead. In places where there is collective sense of purpose and willingness to be supported, the likelihood of successful community upgrading is greater.

In April 2015, I attended workshop and learnt another way of capturing data – through the ONA platform. This is an SDI managed online tool, which enables communities’ to key in; process; analyse; verify and generate information about informal settlements. I have passion for profiling, what I love most about data is that it talks about people’s livelihoods in informal settlements, and the interesting part altogether is that and when people begin to speak back to the data, collective actions and needs is inevitable. This information helps we, slum dwellers in stopping evictions which happens regularly in most settlements, and while using this information communities are well able to advocate for provision of services in their slums. This has really improved my skills and made me who I am today.

Recently, I had an opportunity to visit Zimbabwe to attend a data profiling and ONA platform workshop in Bulawayo city in June. In this session I was able to take other federation members from different countries through keying in data using ONA, this is because of the capacity, skills and experience I have gained through Muungano wa Wanavijiji.

As an affiliate of Slum Dwellers International, we visited Ngozi mines, an informal settlement located within a dumpsite area in Bulawayo central. Together as a team we supported the Zimbabwean federation in a settlement profiling and mapping exercise with other federation members from different countries, before leaving Ngozi mines, we supported the communities living there to organise the community and formed a saving scheme and saved five dollars and fifteen rands.

To date, the group has twenty five members.

One aspect that I took home after the learning exchange to Bulawayo, in particular is that forging partnerships with our governments is key in addressing issues of informality and slum upgrading. Civil society and private sector groups are also becoming important players in the urban arena. Slum dweller movements, such as Muungano wa Wanavijiji effectively reach out to communities and are best assigned the roles of community organizing, facilitating dialogue, community organising-through empowerment of community savings schemes, community prioritized need identification, project identification, project management and maintenance of community facilities, which often creates a sense of collective ownership that further drives sustainability of community projects.

Additionally, I could not help but notice that the private sector, through the Kenya Private Sector Alliance (KEPSA), is increasingly interested in working with the county governments in developing low-cost housing in various counties. Muungano recently undertook city wide settlement profiling in six counties. Sets of information generated from the process have continued to empower communities to have knowledge of their informal settlements, which  through prudent discussions, slum dwellers have begun engaging their local governments on the provision of basic services and infrastructure developments. In a long time counties, have finally recognized the importance of engaging all the stakeholders in planning, execution and monitoring programs for the poor.

Governments have an important role to play in respect of addressing issues of slums, particularly by creating partnerships between national and local governments, civil society and even the communities themselves to work toward an expanded and sustained program for the urban poor.

Reflections from SDI at WUF ...

This year, a delegation from SDI’s network attended the World Urban Forum (WUF), here are...

As cities across Africa start to lift pandemic restrictions, youth speak out as they are...