Making Technology Count for the Urban Poor in Thika, Kenya

On 12 August 2015 in Kiambu County, Kenya, the County Government, the Kenyan Slum Dwellers Federation – Muungano wa Wanavijiji – and Shack / Slum Dwellers International (SDI) marked the beginning of a partnership to profile, enumerate, and upgrade Kiandutu informal settlement in Thika town. Located centrally within Thika town, Kiandutu houses an estimated 10,000 families and sits on 100 acres of land.  The land in Kiandutu is owned by the Kiambu government, which seeks to regularize the tenure of the families in the settlement as well as to redesign the settlement in order to free land for the development of public services.

SDI and the Kiambu County Government signed a Memorandum of Understanding (MOU) which details the overall objectives and specific activities that each party will undertake in order to reach the partnerships goals. The MoU acknowledges the community as a partner in the redevelopment of the settlement and provides the opportunity for a pilot project demonstrating the potential success of city / community co-production.

The deliverables of this partnership include a full slum profile of Kiandutu, followed by a household enumeration. These exercises will be followed up with the construction of four sanitation blocks and the planning, design, and implementation of a mixed income upgrading for Kiandutu settlement, and any other settlements in Thika where upgrading projects are requested.

The initial output of the MoU is a community enumeration that recognises all residents of Kiandutu and provides data as the basis for planning and project design. The enumeration is vital to develop the structures and practices of collaboration between the community and the County government. The data captured must be accurate enough for adoption by the County government as a formal register of residents. In addition, there is a need for wider public accountability, through the enumeration process, to illustrate that the re-development of the land is the best public good.

In order to achieve this, this enumeration drew on best practices from SDI’s global network and on innovative practices – namely the move to electronic data capturing on tablets – to improve data capture, management and analysis. Jack Makau of the Kenya SDI Alliance shared their experience of this enumeration in a blog post, included here: 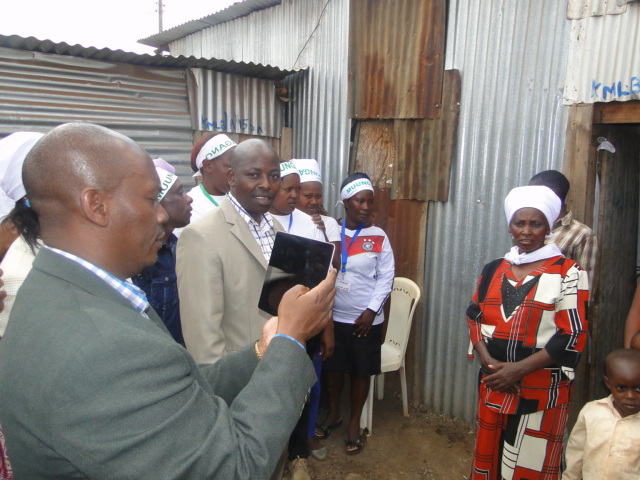 Over the last 15 years, Muungano wa Wanavijiji, the Kenya federation of slum dwellers has surveyed and mapped over 340,000 slum families living in 364 settlements. In its latest survey, conducted in Kiandutu slum – 40 kilometres north west of Nairobi, Muungano made a switch to use technology for collecting and processing data.

On the ground, in Kiandutu (which means, place of jiggers) 170 community members were selected to map each of the settlement’s 10,000 shacks and collect details of each family and each person living there. Instead of a paper questionnaire, the enumerators used Android 6.3 inch touch-screen tablets. According to Muungano’s chair person, Rashid Mutua, “we had a choice of smart phones or tablets , both within the same price range. We chose tablets because some of us have fat fingers.”

The tablets are installed with an Enketo web form that has all 37 questions contained in Muungano’s previous paper questionnaires. The tablets do not require an Internet connection to work. The enumerators collect data offline all day, and in the evening the data is transferred into a GIS enabled database.

Muungano’s fears, that the use of hi-tech gadgetry would exclude the participation of its mainly community women membership, were heightened when the Kiandutu community brought forward the names of 27 elderly persons to be included in the survey team.  At the end of what is usually one day of enumerator training, Kilion Nyambuga, trainer and GIS expert employed by Muungano, reported that additional days of training would be required. By lunchtime on the second day of training, the enumerators were deployed to the settlement to start data collection. Kilion reported that somehow the whole team had made the switch and were comfortable using the tablets.

Muungano National leader, Joseph Muturi, says the decision to move to a technology solution was because, “we do not have the time to collect data for one month, then spend another month putting it into computers, and another month analysing it and developing reports – all the momentum for a community action that we have generated in a settlement is lost in the time it takes to process data”.

The step to venture into the digital unknown and invest in tablets was reached in Muungano’s planning meeting for the Kianduttu survey. A simple back of the napkin calculation showed a 23 percent saving on survey materials and equipment. Ordinarily the 37 questions in the survey fit on 3 sheets of paper that cost 30 US cents each to print. Another 30 cents is paid for data entry. Each survey requires boxes of pencils, rubbers and sharpeners. The Kiandutu survey would have also required an additional 9 cameras and 12 GPS receivers. The tablets take away all these costs.

The switch is however not just a horizontal one from paper into computers, says Kilion. The community enumeration process is made far more accurate. “We are now able to ensure that all mandatory questions like the house number and the resident’s name are answered”. It was a major problem in paper surveys when enumerators returned questionnaires with key information missing. “We had the painstaking task of going back to find families whose house number was left out and we also spend weeks linking pictures stored in separate camera’s with households in the database”. He adds, “Right now we can even check the exact location where a survey was done – if a house is in one end of the settlement we can ask why the survey was done at the other end of the settlement”.

Yet, the use of tech devices does not take away any or all the intensity of doing a 100 per cent household survey in a slum.  Like in all enumerations where a team stays on after the days data collection and goes through the returned surveys, someone will need to stay on to charge the tablets, download all the data and check that the data collected is good.  There are bigger considerations though.

On one hand, not only does the purpose of the survey need to be explained to every household, but also the capture of information into a gadget needs to be explained. On the other hand, somebody who operates an informal water or electricity distribution business in the slum is just as likely, or even more likely, to resist a survey using a tablet as they would one using paper.

The gadgets themselves present a challenge in a context like Kiandutu where you have large numbers of unemployed youth who are presented with a smart device with Facebook, Twitter, Instagram and all other pleasures. Things that are beyond their immediate ability to purchase. Whether Muungano can persuade without necessarily policing the community and especially the youth, that they stand to benefit more by not keeping the devices for themselves, remains a test of the federation’s effectiveness in organising.

This blog post was originally published on the Muungano wa Wanavijiji blog.