The "G7" of the Urban Poor Happening in Zimbabwe 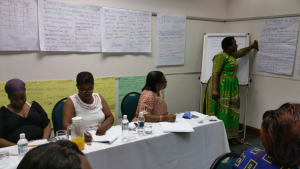 Representatives from seven Slum/Shack Dwellers International affiliate countries that constitute the Southern Africa Hub are currently meeting in Harare, the capital of Zimbabwe, for yet another opportunity to learn and share their varied experience on how they are tackling the challenges faced by the urban poor in the region. The affiliates attending the meeting include South Africa, Malawi, Botswana, Zambia, Namibia, Swaziland and the host, Zimbabwe. Hub meetings are regularly held in each of the affiliate countries. The Harare meeting follows the last one held in Blantyre, Malawi in March earlier this year.

The hub meetings, which have been employing the recently adopted SDI Learning Monitoring and Evaluation Reporting Framework as the basis for the reflections, are systematically being used as a tool for facilitating and deepening learning processes. 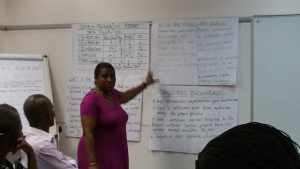 Proceedings for the first day of the hub meeting focused on savings and enumerations with the affiliates reporting on the planned activities, achievements and challenges. The Federation of the Rural and Urban Poor (FEDUP) from South Africa highlighted that they have since introduced new tools and systems geared towards improving savings. Simple but essential new recording systems are strengthening the savings culture that typifies federation processes. Savings Management Teams have been put in place and to date information about savings is being collected consistently. As a result the savings have also increased significantly enabling the South African Alliance to attain the savings targets they set for the reporting period April 2015 – March 2016. Increasing the capacity of savings management teams and networks has helped to develop the rudiments for supporting struggling saving schemes and catalysing the formation of new schemes.

The Zambian Federations have devised new strategies to boost saving scheme membership. This has included redefining the mobilisation messages. While traditionally saving scheme mobilisation has largely focused on land and housing, the new approach also places emphasis on day to day challenges which can be achieved in the short-term, such as responding to livelihoods challenges that the urban poor struggle with on a daily basis. In addition, the Zambian Federation together with their support NGO are supporting the establishment of Informal Settlement Networks (ISN). In countries where they exist, the ISN’s have become essential structures at the grassroots level to organise slum dwellers into a coherent voice for negotiations with government around access to services and secure tenure, bringing together the Federation saving schemes and other stakeholders in each settlement.  Informal Settlement Networks, a model that has been learnt from the South African SDI Alliance, have enabled communities in slums to start tackling community development priorities and at the same time availing scope for city-wide engagement.

The reports and subsequent conversation on profiling and enumerations indicated an emerging trend by affiliates of going beyond ritualised counting of slum communities to effectively using the information collected for action. All affiliate reports demonstrated a thrust towards making effective use of the data and maps generated through profiles, household surveys and spatial analysis of slums. The experience of the Shack Dwellers Federation of Namibia in the town of Gobabis is an example of how affiliates are using the information – translating the figures from the surveys to tangible benefits for the urban poor.

In Gobabis, a Federation-driven enumeration exercise has culminated in a reblocking programme resulting in secure tenure for 1,000 households. while in Tsumeb, 300 plots were allocated to the federation. Affiliates are also starting to use information generated from settlement profiles and enumerations to push policy-oriented agendas. In Lusaka Zambia, for example, the partnership between the Federation and their NGO People’s Process on Housing and Poverty in Zambia (PPHPZ) with  the Lusaka City Council and the University of Zambia have created  opportunities to create a city-wide settlement upgrading process that include the creation of a settlement upgrading fund.