A Lesson for All: Orangi Pilot Project Visits Tanzania Federation

Orangi Pilot Project is one of the most successful community-based upgrading projects in the world. Over 750,000 slum-based households in this Karachi neighbourhood have contributed directly to the material improvement of their sanitation situation. Through their sustained practical action they have forced the authorities to respond and the Orangi process is now being rolled out in other parts of Pakistan.

The SDI Secretariat has had links with OPP since 1991. When the Secretariat secured funds for a health and sanitation project they factored in direct interaction and horizontal learning between OPP and the participating Federations (Malawi, Zambia, Tanzania and Zimbabwe).

Given the challenges associated with travelling in Pakistan it was decided that OPP leadership would visit Tanzania instead and that other affiliates would also attend. The exchange programme took place between the 23rd and 30th August, 2015.   The participants from Orangi were  Salim Alimuddin Karimi (Director of OPP) and Javed Ali (community technical team) 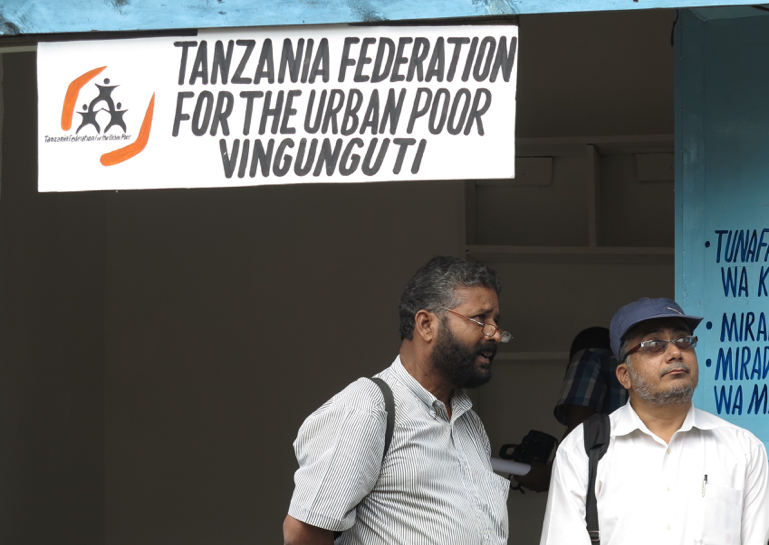 OPP team outside the Federation offices in Vingunguti, Dar-es-Salaam

This report provides insights and analysis into Orangi Pilot Projects (OPP’s) exchange visit to Tanzania to assist with the social and technical development of a simplified sewerage project in Vingunguti settlement, Dar-es- Salaam. It was hoped that with OPP’s support the project could incorporate ideas that would allow it to scale up, affordably, to 1000 households. To date 42 houses have been connected and a detailed feasibility study is underway to determine the possibilities for expansion. The exchange, which took place between 23rd and 30th August and also included delegations from Kenya and Zimbabwe, was hence well timed in that the project is still in a formative phase with many dimensions of its scaling up yet to be decided on.

The exchange clearly highlighted the single biggest challenge facing the project – the lack of an organized, saving federation in Vingunguti. During the exchange it emerged that the Federation in Vingunguti was very new and had not, as yet fully grasped the SDI rituals. As Joe Muturi (member of the SDI management team who was present on the exchange) correctly pointed out, “ It is very difficult to mobilize a Federation through a project”. He emphasized how women’s savings collectives versed in the rituals of the Federation should be the basic project building block, meeting to outline their needs, learning slowly and then, when ready committing financially to supporting projects to improve their lives. This level of community cohesion and co-ordination, the most vital cog in the project continuum, is not present in Vingunguti. Rather it is the project, and what it promises to deliver, which is mobilizing a community that does not have a substantive history of savings and collective action. Unless serious investments are made in building the base, significant problems may emerge down the line.

Discussions during the exchange indicated an expectation that the project would be for free – in no small part related to the Tanzanian Alliances provision of the first system as a grant and not a loan (recent correspondence indicates that the Alliance is now requested loan repayments for the system but there may be challenges because of its high capital costs). Over the course of the exchange the team from OPP, supported by the SDI Management Committee, worked extremely hard to emphasis to the community that they needed to contribute financially towards the sewerage system. OPP illustrated this point by describing, in detail, how residents in each lane in Orangi had been able to pay for their entire primary sewerage infrastructure. By the final day of the exchange some progress had been made with community members indicating that they would be prepared to pay for infrastructure themselves.

An important social (and financial) aspect related to the project will be negotiations between structure owners and tenants. This relates not only to building collective action to implement and manage the project but also to negotiating project finance (see finance section). The Tanzanian alliance does have experience with mediating landlord/tenant relationships around shared sanitation – drawing in local councilors. These experiences should be applied to this project.

A further point that warrants debate is the ability of the Tanzanian federations leadership to mobilize the Vingunguti settlement. The Federation in Tanzania is not yet strong and it was noticeable during the exchange that the NGO often fills this space where the Federation should be.  It remains to be seen whether the Tanzanian Federation has the capacity to mobilize this community in order to conduct a project of this scale – and if they do what other priorities may suffer. 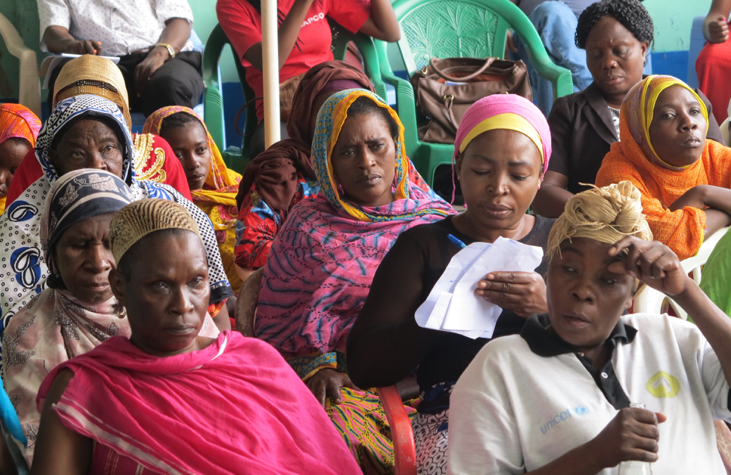 Discussing roles, responsibilities and finance with the Vingunguti Federation

A number of extensive discussions took place around financing during the exchange. As noted previously, the first phase of the project was a grant. The OPP team noted that providing a subsidy for phase 1 of the project and then expecting residents to finance phase 2 would be extremely difficult – as a precedent for non-payment for the system had already been set. While the Tanzanian Alliance now does require those who received the system in the first phase to repay the loan – this was done retrospectively. Also the conditions and terms of said loan repayment were not debated before construction began.

The team from OPP shared how the simplified sewerage system in Orangi was financed fully by the community, one lane at a time. It was strongly emphasized that the community felt ownership of the system because they had to pay for it – financially and through sweat equity. Construction would not begin before the community had saved all the necessary funds and those who refused to pay would be covered and then later charged double when they wished to connect to the system.  The Tanzanian Alliance were keen to follow the OPP approach by working land-by-lane to mobilize as many houses as possible along the proposed sewerage line (the more houses which connect the less the capital costs) and encouraging them to save collectively for the system. Lane-by-lane technical capacities can be built and new technical skills to reduce costs can then be deployed. Salim from OPP noted that the first lane was the hardest to organize – taking over 6 months for the community to resolve issues and come up with finance. Time and effort must be invested in working incrementally, lane-by-lane, in Vingunguti to build a model which is scalable and affordable.

The willingness of the community to contribute is the crux of the project’s financial challenge. In a grant atmosphere where other role-players (and even the Tanzanian Alliance) provide services for free changing attitudes towards payment will be absolutely vital. In addition SDI has already provided significant capital and technical support to the project (Project capital for the pilot through SHARE, funding for the preparation of a feasibility report and the funding of the OPP exchange). SDI cannot continue to fund a project in which the community does not contribute financially.

There is little doubt that the existing model is not affordable for the poorest tenants in Vingunguti. For a variety of reasons (discussed in the technical analysis below) capital costs are much too high when compared to incomes from the preliminary findings of the feasibility report. Rebuilding dilapidated latrines to then connect to the system has added additional costs that increase the total.  Measures to reduce these costs are discussed in the technical section below.

Joseph Muturi, from the management Committee, upon discussions with the Tanzanian Federation, noted that most of those present at the meeting (and those who have accessed the system to date) are landlords who, he feels, can afford to pay to connect to the system. He noted that if landlords can be mobilized to pay, and costs come down due to technical interventions, then the system could be affordable.   He stressed that intensive negotiations between landlords and tenants need to take place to ensure that rents are not then increased to unaffordable levels to cover costs- leading to evictions. Issues of absentee landlords and those who do not wish to participate also need to be considered.

In the existing pilot not all the houses along the sewer line are connected to the system. Simply put more connections equal a division of costs between more households – with each household paying less. OPP and all the visiting delegations agreed that the Tanzanian Federation needs to work to mobilize as many households along the sewer lines as possible – and that their maps should show all the houses not just the houses connected.

The OPP team was able to provide the young, but enthusiastic CCI staff with a number of very practical suggestions to reduce the cost of the sewerage system. These are listed below and taken from the exchange report:

During the exchange it was noted that the system would remain expensive if, for each connection, the existing latrine is rebuilt (through an existing programme of sanitation loans). A variety of technical suggestions were made by OPP as to how it would be possible to repair and rehabilitate, rather then rebuild, existing latrines so that they can be connected to the system. Ideas included concrete rings to re-enforce collapsing pits and focusing on fixing the slab only and not financing an elaborate and expensive superstructure. Once repaired latrines are connected to the system the social and technical expertise should exist within the community to incrementally upgrade toilets that’s are in poor condition. 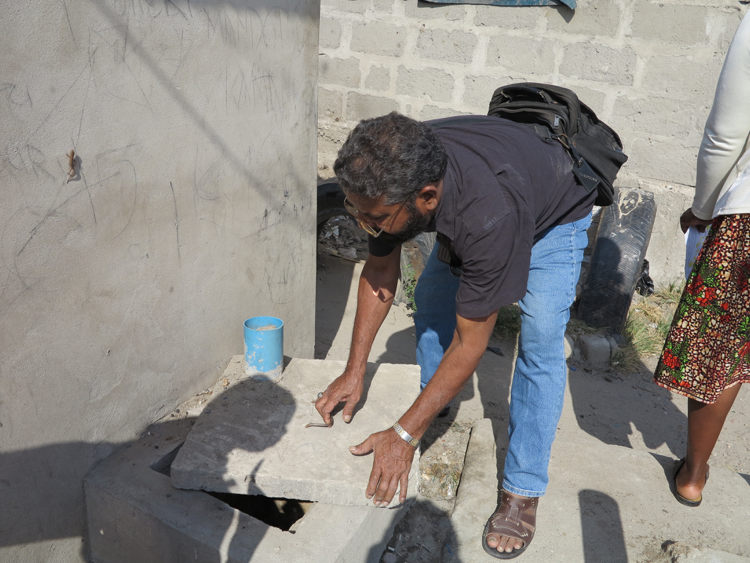 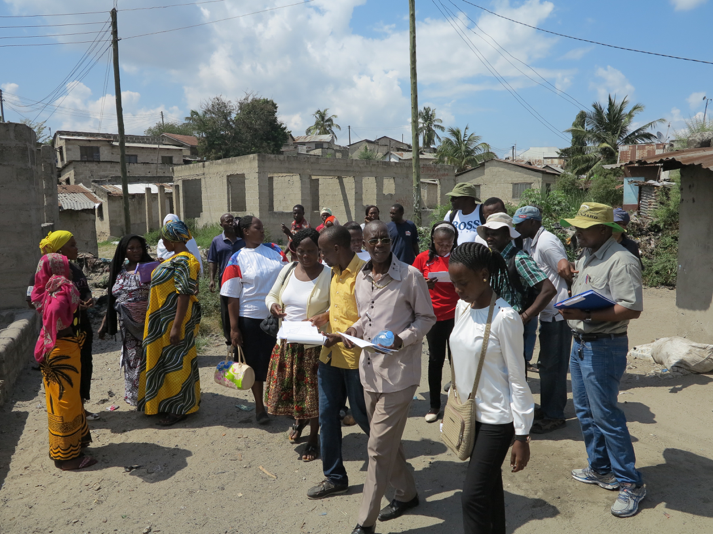 The OPP exchange challenged the Tanzanian Alliances position that they had to consider access to tertiary sewerage treatment facilities before starting the construction of primary sewerage systems, lane-by-lane. OPP argued that if the community was able to fund and build their own system, and sewerage from that system leaked into the open (or flowed unregulated into the existing ponds in Vingunguti) it would provide a direct challenge to government to link the system to secondary and trunk sewers. This type of practical action would challenge authorities to act, rather then the common approach in which communities sit back and expect services to be delivered.

Given the previous commitment of authorities to fund 500 of the 1000 connections the Tanzanian Alliance needs to make sure government is 1) reminded of this commitment and 2) informed at as many levels as possible about the project (A precise synopsis of the feasibility document /project plan should be developed to do so) 3) Begin to think through the necessary institutional tapestry that will enable the project to scale up.

In addition CCI needs to retain and foster the connection with OPP – through correspondence and perhaps at a later stage exchanges. 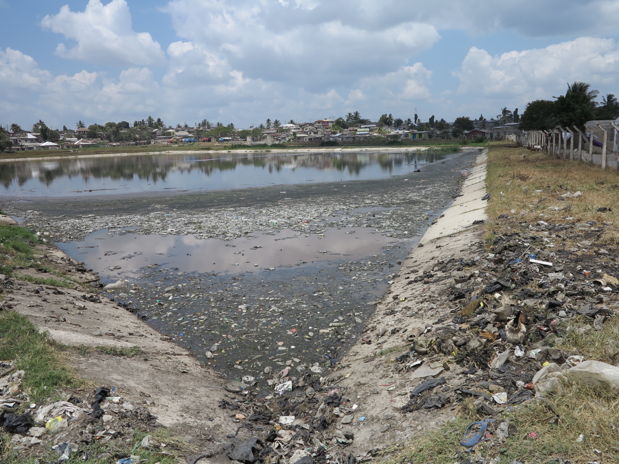 The wastewater ponds that border Vingunguti 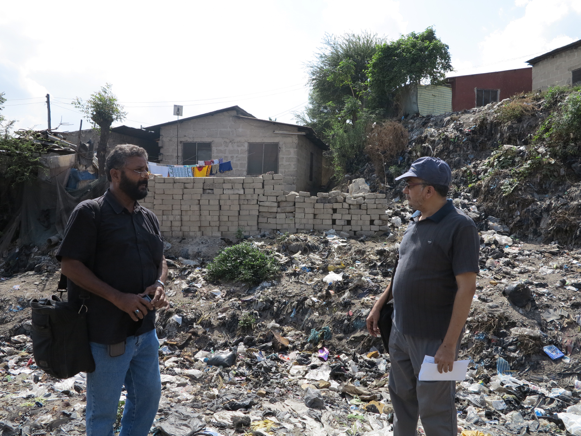 An attempt has been made to order these in terms of current priorities. However it is expected that many actions will run concurrently: 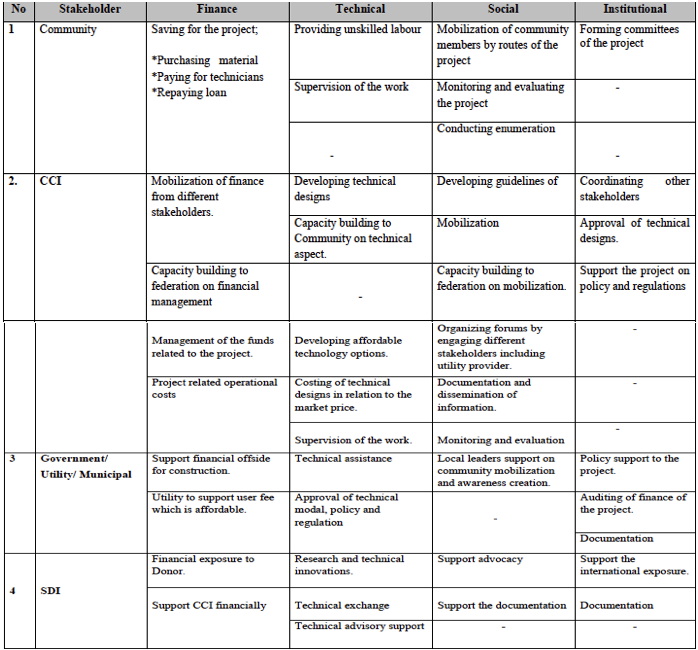