By Evans Banana and the Zimbabwe Homeless People’s Federation

This is the first in a series of eight blogs that highlight lessons from community-led sanitation practices and experiences from across SDI’s network and which exemplify our practice. The blogs will cover practical, social and financial aspects of sanitation provision for residents in low-income, primarily informal, settlements. There is no single solution that can address sanitation across the network. This series offers a “toolkit” of options that speak to a variety of contexts. This “toolkit” is grounded in the experiences and learning of the urban poor Federations which make up SDI’s network. The first blog in the series describes a communal sanitation facility for families renting accommodation from the council in Chinhoyi, Zimbabwe.

This example has been selected because it is very affordable to local residents and includes even the lowest-income families. The solution involves the local community working in collaboration with the council to provide facilities that are managed by residents, organized through their savings groups. In this case council made a significant financial contribution of USD 7,500 to the project.

Saving groups or schemes as they are commonly known across the SDI network are the centre of community organization and act as an entry point to build cohesion between individuals. The saving schemes are formed on a voluntary basis and individuals agree to abide by collectively agreed group principles or rituals. Rituals are basic guidelines to a group’s behavior and identity. Groups can practice daily or weekly saving and can collectively decide on which priority to save toward. The saving schemes within a settlement form an area network that is strategically used to engage with the authorities on a commonly shared vision. Over time saving schemes federate at the settlement, city, and national level and are mobilized around solving common challenges. In the case of Gadzema, a saving scheme was established and prioritized saving toward sanitation and engaging local authorities on this issue.

Chinhoyi was established in 1906 and is one of Zimbabwe’s oldest towns. Like most colonial settlements the town is divided between the affluent, spacious, homes of white settlers and the more cramped accommodation of the majority black labour force. Gadzema, the settlement where the communal toilet is located, was originally developed as hostel accommodation for black male laborers working in nearby industries.

After independence, wives and children joined their husbands in Gadzema. Over the subsequent years political instability and a rapidly weakening economy hampered local authoritys investment in housing and infrastructure maintenance.

The communal sanitation project is in an area known as “Gadzema Single Quarters”  where 60 families live in 15 four-roomed units. These families are either leasing from council or sub-letting rooms from the Council tenants. Council leasholders  have valid lease documents and receive a monthly bill from council, which very few pay. Those tenants who sub-let pay rent to the above council leaseholders ($35-$40).  The sub-letting of rooms has allowed a parallel structure of rent collection to evolve which has caused the revenue flow to Local Authorities to dwindle. Their commitment to provide services has, in turn, waned. The toilet at the nearby bus terminal is usually closed by local authorities despite its increasing volume of commuters. 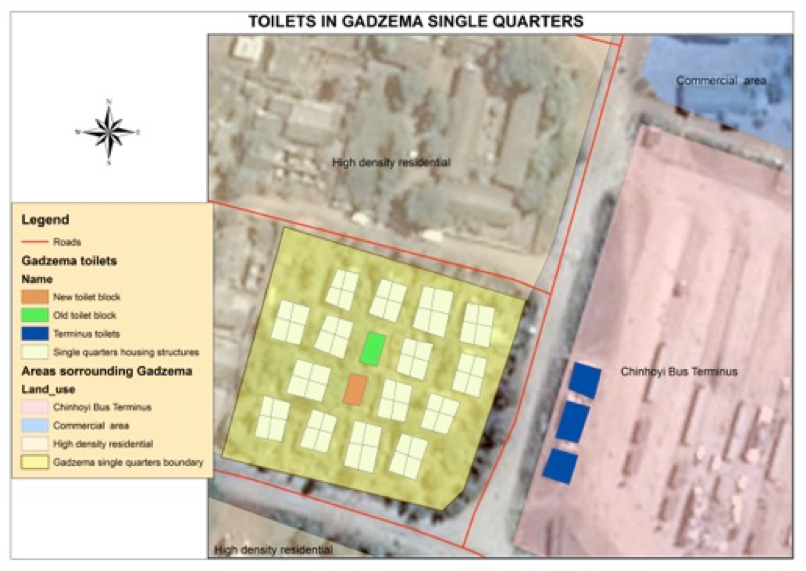 Federation profiling and enumerating highlighted the dysfunctional and unhealthy state of the existing toilet blocks in Gadzema. Human excreta overflowed in the passages of both women’s and men’s toilets clogging the sewers and making the toilet unsafe to use. At times the sewerage escaped the toilet block and flowed into nearby pathways and homes causing a serious health threat. Haphazard efforts were made by residents and council to maintain and unblock the system with little effect. The community felt that authorities should clean and maintain the toilets in return for rates payments, while authorities argued that the lack of rates payment by the community meant that they could not provide infrastructure and maintenance services. Whatever the truth, these perceptions created a vicious blame cycle in which neither party took responsibility for maintenance. 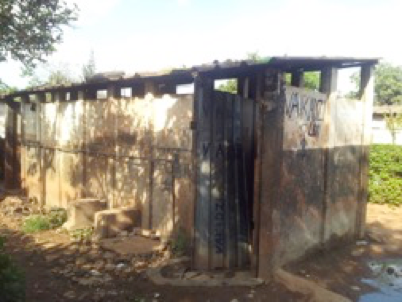 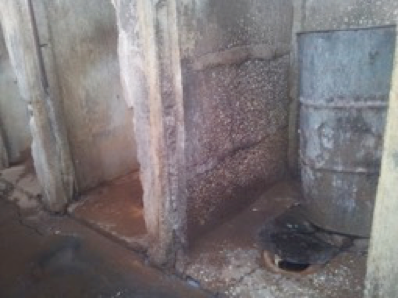 The Poor conditions of facilities

Challenges emerge and are negotiated

Give the challenges faced, the Federation, supported by the Zimbabwean NGO (Dialogue on Shelter), undertook the following acitivities.

Federation members used profile and enumeration data and the project steering team to mobilize both community members and local authority staff. The team is composed of representatives from the local council, federation and Chinhoyi community and Dialogue on Shelter. From the council side, the project was anchored by the housing, health, engineering and planning department and it was common practice for departmental heads to attend the meeting. National or regional Federation leadership as well as members of the Chinhoyi Federations Health, Technical, Savings and Mobilisation components would also attend. Community data was shared with the authorities and feedback meetings were held. Gradually both sides came to see sanitation as a common challenge that could be addressed collectively.

Confusion around the provision of title was a further stumbling block in negotations between residents and the authorities. Gadzema residents wanted council to transfer title to existing tenants, however the residents felt this process was far too slow. The Council was reluctant to expedite the process and tensions flared, causing sanitation negotiations to break down, between October 2013 and May 2014. The impasse was overcome by using profile and enumeration data to develop an action plan which directly responded to the tenure challenge – the idea being to work with council to identify alternative land for decongesting the site as a long term solution but, in the interim, to improve sanitation conditions at the current site.

The task of convincing both authorities and the community that a public toilet can function under the right model of ownership and management required intensive “unlearning” of preconceptions– especially given previous experiences in Zimbabwe. The continued use of profile and enumeration findings in engagement with both the city and Gadzema community led to the Gadzema community being able to clearly articulate, and appreciate, their potential role in the maintenance of community-managed facilities.

Initially, the Gadzema community was fraught with political divisions and even calling a general meeting was impossible. Community-led data collection demonstrated that the small community was politically fragmented. The survey process led to the formation of a Toilet Committee tasked with supervising the construction and maintenance of the toilet and with mobilizing the general community to support the project. The committee is comprised of 8 community representatives, 3 men and 5 women. The Federation’s leadership within Chinhoyi initially supported the Committee. The support was provided throughout the toilet design and procurement stages (three months) and the committee was left to finish the construction and organize the management of the toilet on their own.

Many families in Gadzema pay rent to absentee landlords. It was hence difficult to locate the “owners” and convince her/him to invest in sanitation. Tenants described their stay as transitory and were not strongly motivated to invest in sanitation. Landlords who were tracked down were not overly keen to invest in sanitation, as this would reduce their profits.  However after the enumeration revealed that 33% of households were sub-letting rooms from council leaseholders the community devised a number of measures to persuade every household to participate. The Toilet Committee set-up a register to record individual participation and financial obligations. The federation encouraged the residents to organize themselves in the 15 dwelling units with the families in each unit reaching agreement between the council lease-holder and sub-renters. As the project progressed, 95% of absentee landlords co-operated, while 5% allowed their tenants to negotiate on their behalf.

Once the residents agreed to participate, plans could be drawn up.

Rebuilding the block[1] cost USD 16,500, and there are now eight bathrooms and eight toilet cubicles. The local authority contributed USD 7,500 (transport, building materials, river sand, plumbing). The remaining cost of USD 9,000 was divided between the households. The Federation provided a loan to each of the 60 households who will use the toilets (USD 150 per family).  Monthly repayments of USD 6.25 are added to council rates for the next two years.

The project is also cautious to avoid significant rental increases due to sanitation improvement hence the prolonged negotiations to have council agreeing to put 100% of invested resources into the sanitation fund without increasing the monthly taxes. At the time of writing the amounts paid to council were USD 27 per month (rental and services for each family).

Street lighting is no longer working properly and in some cases this poses a challenge for those using the toilet during the night. However the community has installed lighting inside the toilets and is working on putting security lighting at the toilet block. The density of the settlement helps to ensure safety to use the toilet during the evening as the houses are close to each other and the compounds are also very small.

After construction was completed, all 60 households met and designed a management model. Each toilet would be used by seven or eight families with a roster for cleaning and maintenance. Each family has its own set of keys and are able to hold others in their group to account if they feel that the toilet is not being properly looked after.  It was also agreed that, because piped water is something not available, each family will store water at home.  Floor polish, freshener, toilet paper and any minor repairs are financed collectively from the money collected for maintenance. The toilet has now been in operation for six months and no significant problems have been reported. 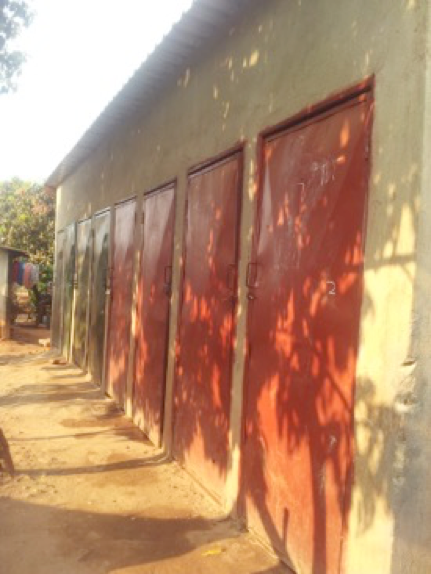 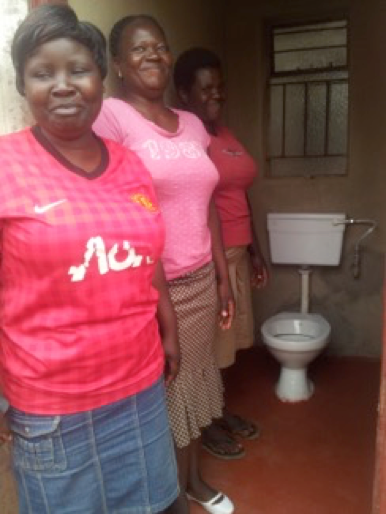 This work has shown the potential of profiles/enumerations as a mobilization and dispute resolution tool.  Amidst a politically fragmented community in dispute with authorities this “objective” information paved the way for a joint vision and collective action.  It also provided guidance around what was affordable.

The project opened up the space with council for discussions around a sanitation revolving fund in Chinhoyi that can be used to rehabilitate other communal facilities.  The fund would be seeded from repayments of the USD 9000 and topped up by other contributions. The Federation’s successful work in Gadzema is being replicated through the construction of a school toilet at the Ruvimbo Primary School financed by a loan from the Federations national urban poor fund. The toilet has been completed and the school has already begun repaying the loan.

[1] The completion of the first toilet block took longer then expected and the community decided that there was no need for a second block as a single block was adequate for their needs.