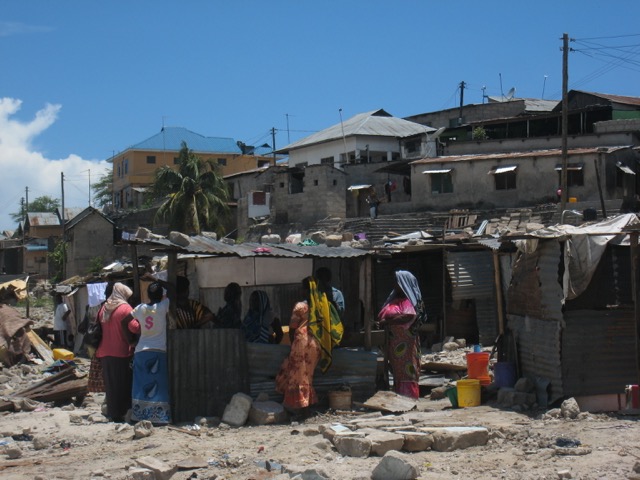 On the 17th December 2015, demolitions began. By the time they were halted by a court injunction in the first week of January, 1,412 houses in six sub-wards had been destroyed and an estimated 9,900 people made homeless. The government agency gave no warning. People were phoned at work by their neighbours to be told that their homes were being taken down. Tenants and resident land owners had their belongings crushed with the buildings. Food, clothes, documents… were all destroyed.  Those on the site tried to protest but their words were not heard. Even those with formal responsibilities such as the chairperson of the sub-ward was not been notified of the demolitions.

The demolitions took place in neighbourhoods next to the Msimbazi river. Some residents dispersed, relocating outside of the neighbourhood or finding space with their extended family who lived in neighbouring areas. However, some residents have no alternative. These families moved away from the area in the day but returned at night and slept among the rubble. The difficulties are immense. Some families have suffered further. One man died from stress as he watched his house being torn down. A women was forced to sleep out with her two month child who subsequently died. Since the injunction was secured, some families have built corrugated iron shacks in the wasteland that the government has created.

The National Environment Agency (under the Ministry of Environment) ordered the demolitions arguing that this was an area that regularly flooded and the houses were built illegally. Each year, they argued, the government had to take responsibility for temporarily housing residents of flooded dwellings. In 2011, they had relocated some people by the government but few had stayed in part because the neighbourhood was remote and far from work and services.

After clearing the ground, the officials returned to install a sign that informed people they were not allowed to live in the area.

The households were told that the government was clearing the land 60 metres on either side of the river. However, this stipulation has not been followed. In some cases, dwellings have been cleared for distances in excess of 60 metres; sometimes more than 100 metres. At the same time, a public hospital adjacent to the river remains standing.

These neighbourhoods have been in place for decades with many of the evicted residents have lived there for a considerable time. While the government argues that the housing is informal, these are people who have formal water services and who have been first surveyed and secondly charged for property taxes. Recently some organized groups have been cleaning the river but they lack the equipment to clear the outlet to the sea due to a build up of waste against the mangrove swamps.

The court injunction is now in place for another two months.

The Tanzania Federation of the Urban Poor has begun to mobilize residents in the area. The Federation encourages residents, particularly women, to join savings groups. Eighteen savings groups are working to increase the options faced by this group of displaced people. Residents are willing to vacate the area immediately adjacent to the river but are asking that the government provide accommodation on the remaining portion of the site. However many people live “hand-to-mouth”; it is not clear that people can afford to repay.

The Protest, The Representatives and The Peti ...