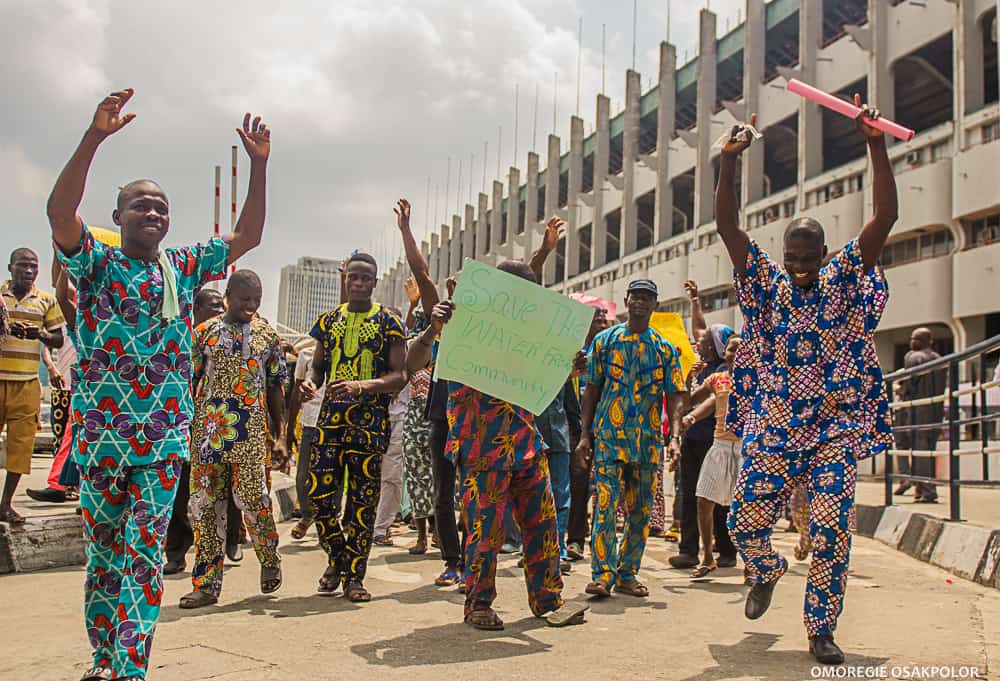 This second half of 2016 witnessed the most intensive period of sustained popular action in the history of the Nigerian Federation. It started with the mass eviction threat to 17 waterfronts in Port Harcourt in July 2016. In response, the Federation turned out in their thousands in peaceful demonstrations. A delegation from Lagos, which blocked the main road in Port Harcourt, faced tear gas and a police barricade that nearly turned the crowd back, but finally it led to a meeting with the Rivers State Governor and a first-in-history reversal of an eviction threat.

In the lull between mass eviction threats, on 4 October 2016, the Federation led a peaceful protest where Federation members stood together with informal workers affected by the State Government’s crack-down since July 2016 on street traders and hawkers. For a month prior, Federation led outreach to street traders in the areas most affected by the crackdown and helped organize them to join with the broader movement of the urban poor. On 4 October 2016, the Federation led a protest calling for a pro-poor policy agenda – “Our Urban Agenda” – linking local demands to the H3 New Urban Agenda.

On 9 October 2016, the Lagos State Governor announced in the media that the State Government would start demolishing “all shanties on waterfronts” within 7 days. The Federation sprang into action, circulating fliers to all member waterfront communities on 10 October for them to send representatives to a meeting. On 11 October, over 20 communities gathered and wrote a collective letter to the Lagos State Governor calling for retraction of the notice and warning of mass protests if the notice was not retracted.

On 13 October 2016, the Federation staged the first #SaveTheWaterfronts protest with hundreds of waterfront residents in attendance. Those who met them promised to communicate to the Governor and get back to them within 36 hours. Instead, within 36 hours, a waterfront settlement called Ilubirin was demolished and there was no response to the Federation’s demands.

Consequently, the Federation embarked on another, much bigger, peaceful protest on 18 October. This time, the Federation met police barricades and broke through them to get to the Governor’s office; they ended up blocking the entrance of the Governor’s office and the House of Assembly as well as many of the roads leading to/from/around the Lagos State Secretariat, insisting to meet the Governor – but the Governor did not come out. In the end, the Speaker of the House addressed them and promised to set up a committee.

The next day, the Lagos State Government put our a public statement indicating that it would not change from its planned course of action to demolish the waterfronts, referring to the peaceful protests as “blackmail” to which the State Government would not succumb. In response, 15 Federation waterfront communities joined together and asked JEI (Nigeria support NGO) to represent them in a case in court to try to protect their fundamental rights and restrain the Government from demolishing their communities.

Despite this order, the State Government on 9-10 November 2016 carried out a massive forced eviction of Otodo Gbame, displacing over 30,000 people according to the most recent profiling exercise completed. At least 11 people died in the process, drowned when people who could not swim were chased into the Lagoon to escape fires during the first phase of the demolition.

As early as 11 November 2017, Federation mobilized water and foodstuffs to help provide some relief to evictees in Otodo Gbame (more major relief efforts began subsequently). The media started to pour into the community and Federation supported to bring media to cover the plight of evictees. Federation also agreed with residents from Otodo Gbame to go on a mass peaceful protest to the Lagos State Government on 15 November. More than 600 evictees and other Federation members – including a delegation that travelled on an overnight bust from Port Harcourt to join in solidarity – went on protest and practically every major media house was present to cover the event. Again all access to the Governor’s Office and the State House of Assembly were blocked as the protesters demanded to see the Governor. Once again the Governor refused to come out to see the evictees.

In the ensuing weeks, Federation mobilized hundreds of evictees and other Federation members to court for three hearings; Federation documented a series of violent attacks on the community in which evictees were wounded and, subsequently, organized a smaller protest to the Zonal Police Command on 24 November 2016 to deliver a letter demanding police protection for evictees. Federation joined evictees in a series of hearings by another committee set up to look into the Otodo Gbame evictions and also supported the evictees through an investigation by a team of police from Abuja.

As the various advocacy efforts finally led to a period of peace, Federation helped support Otodo Gbame to start rebuilding their community – the greatest form of collective action possible under the circumstances. However, despite all the efforts the ongoing threats and eviction continue. The Nigeria affiliate with support from the SDI network continues to engage stakeholders at both the local and international levels to demonstrate alternatives to forced eviction.

This text is a direct excerpt from the Nigerian affiliate’s reporting to SDI.