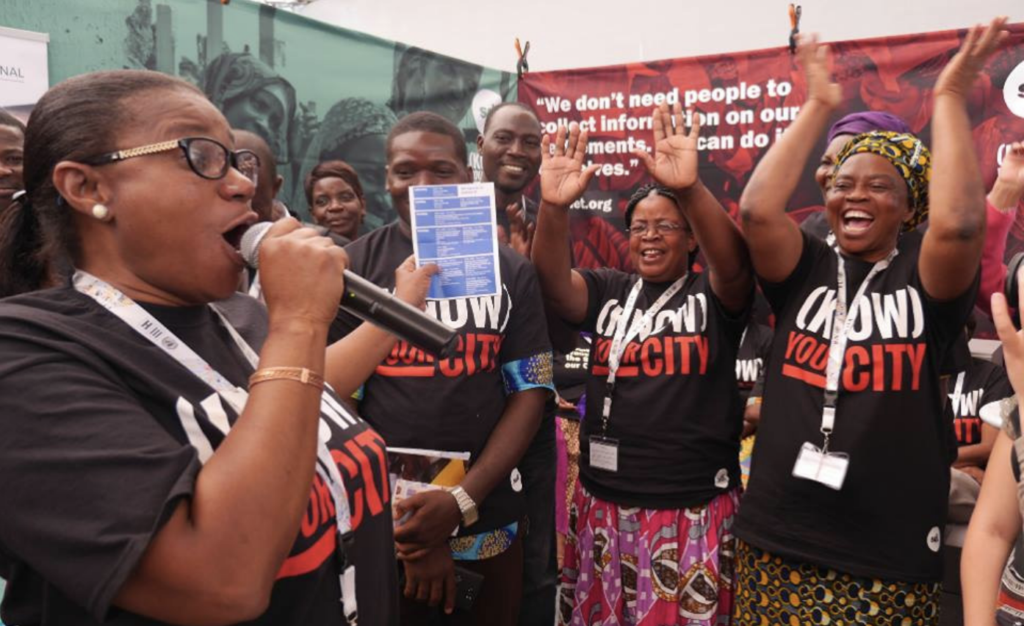 Earlier this month, SDI launched a landmark publication: “Know Your City: Slum Dwellers Count,” showcasing the extraordinary contribution of the Know Your City (KYC) campaign to understanding and taking action to reduce urban poverty and exclusion. Over the next weeks, we will post a chapter from the book to our blog weekly and related material on our social media platforms every day. Enjoy!

By Rose Molokoane, Vice President of SDI and National Coordinator of the South African Federation of the Urban and Rural Poor (FEDUP)

When I told people at the launch of our Know Your City campaign at Habitat III that SDI would profile 100 cities before World Urban Forum 9 (WUF), people thought I was making empty promises like everyone else. I told people that SDI was done with all the talking. Yes, it was good to talk and get the New Urban Agenda and the Sustainable Development Goals (SDGs) in place, but now the talking should end and the work should begin.

Sometimes when I’m in the community, I gossip about the Member States arguing about commas and which words to put in their documents. While they argue, we’re in the informal settlements counting toilets, negotiating with mayors, and building our own houses. I tell the community that we were the ones who put words into the New Urban Agenda about participation and community knowledge, and that now we have to show everyone how it’s done in practice.

If you want to know what it means to Know Your City, I want you to talk to one of the SDI federation members. You’ll find them in more than 30 countries. They’re easy to spot. Usually they’re singing and making a lot of noise. I want them to tell you about measuring shacks that are so close together you need to climb up on roofs to see what’s what; about mapping settlement boundaries and trying not to fall in drainage channels lined with garbage; about going house to house and hearing stories that make you want to cry; and about being chased by dogs and even by people with weapons as you administer enumerations. SDI members will tell you why they go to all that trouble and why they’re always screaming, “Information Is Power!”

After you ask them, then you can read this report. Some of you don’t believe things until they’re in a report with some big words and big numbers. That’s why we did this. We have too many stories, but if we made the report too big it would cost too much money, and we need that money to keep doing our work.

As communities, we know we can’t do everything alone. But we want the global community to understand just how much we’re doing to try to improve our settlements and cities and fulfill the goals we set together. While we’re trying so hard, some governments are still bulldozing our communities and setting them on fire because they want our land. This is one of the things that makes me so angry and disappointed.

In South Africa, our government is trying to understand. Our national government is trying to support Know Your City. Our local governments, through the South African Local Government Association (SALGA) and United Cities and Local Governments of Africa (UCLG-Africa), are also trying. The problem is that government normally promises to bring resources, and then they don’t. If the slum dwellers can bring their resources, why can’t governments? Governments have already committed to these goals. If we really have a partnership, then each side needs to bring something to the table.

Know Your City is about understanding our problems together and then working, practically, to fix them. It’s not a “project,” this thing we call Know Your City. We have been doing it for decades, and we’re going to keep doing it until our cities change. SDG 11 calls for inclusive, safe, resilient, and sustainable cities. Look at our information, our knowledge, and our efforts, and think about how it will support all of us to implement these commitments.