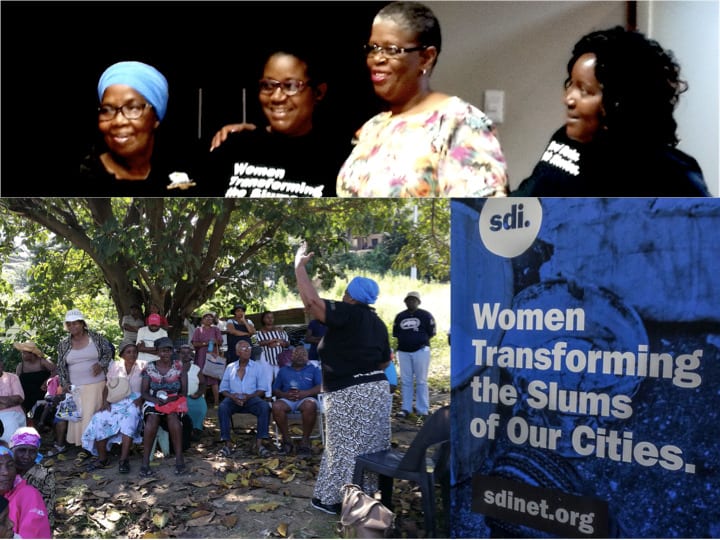 As the Black Panther movie continues to smash box office records and enthrall the world with fearless female African superheroes, a meeting in eThekwini last week suggests we brace ourselves for Women Transformers – coming to a city near you.

The words stretch out across her bosom: Women transforming the slums of our cities, the jet-black shirt and white lettering convey the same no-nonsense, bold authenticity as the woman with the sky-blue doek (headscarf) and thick wooden walking stick. Sitting at the shiny boardroom table in the Mayor’s parlor of the eThekwini Municipal Council offices, wiping the sweat from her brow, she looks decidedly like someone who understands that transformation is not a development cliché, but an overdue national imperative.

Mama Mkhabela, (full name, Nombulelo Anna Estevao) joined the shack dwellers federation (now called FEDUP) 30 years and one month ago. She recalls the first time she sat in on a savings group meeting in Lindelani informal settlement and heard women from the settlement talking about the need to come together to solve their problems. She says the women were telling each other that poor people can’t wait for government to give them things, but must start making change themselves. Shy and quiet back then, she recalls sitting back and listening to figure out what was going on. She soon joined the Sophumelela Savings Group and quickly gained the trust and respect of her fellow savers.

At first her husband was suspicious of her work with the federation. She recalls him secretly following her to a meeting in another community one time. The meeting lasted so long that he had to stay the night and help everyone get back to their places the following day. “From then on, he stopped fighting with me. He saw that I wasn’t up to any trouble and we were just working!” she says with a chuckle. The Sophumelela Savings Group secured housing loans from Utshani Fund – a part of the South Africa SDI Alliance – in 1999 and the women in the group set about building their own houses. Mama Mkhabela managed the loan repayments and moved from a bookkeeper to a treasurer and is now the regional leader of FEDUP in Kwa Zulu Natal. The region has 70 savings groups with 9,672 members and has built over 2,500 houses.

Mama Mkhabela had not come alone to see her mayor. Two comrades from FEDUP, Rose Molokoane and Emily Moholo, accompanied her. The three women have been engaged in the struggle to transform the lives of the poor for decades.

When apartheid ended and commitments were made to house the poor, there was a sense in many communities that the battle was won. Of course, it was soon painfully clear to communities living in shacks that the structure of society rather than the lack of houses was the true cause of their deepening poverty and exclusion. FEDUP and SDI supported communities in KZN to understand the need to shape policy and practice in the city – to support people-driven housing as well as informal settlement upgrading, improved livelihoods and savings, and better access to land and tenure security. “When we started”, says Mama Mkhabela, “there were very few women in city council. The officials were all men and they were very, very difficult. Only the late Patrick (former leader in FEDUP and the Informal Settlements Network) could penetrate the city.”

But times are changing.

Rose Molokoane, President of FEDUP and the Coordinator of SDI, grew up in an informal settlement called Oukasie in the South African town of Brits. Today Rose sits on a plethora of national and international bodies tasked with shaping land, housing, and urban policy and practice. Last year she was elected Chair of the World Urban Campaign where she champions the role of grassroots communities and local government partnership for implementing global agendas. On the international stage, eThekwini’s leadership frequently encounters Rose and other SDI community leaders. SDI’s unique local to global presence has slowly but surely convinced the city of the need to partner with shack dwellers in eThekwini and has quite literally secured these women a seat at the mayor’s table.

Emily Moholo, meanwhile, was born in Mafikeng and is a member of Ithuseng Savings Group. She is a regional leader of FEDUP in the Free State and chairperson of the provincial joint working group on partnerships between the municipality, provincial government, and the Federation. She is also a member of the SDI Management Committee, and supports the SDI affiliates throughout the Southern Africa region to build strong slum dweller federations and partnerships with local government.

Mama Mkhabela, Rose and Emily invited one of the Directors of the SDI Secretariat (a woman) and the Chief Executive Officer of Global Infrastructure Basil (another woman) to accompany them. The women’s joint mission was to: a) update the Mayor on the South African SDI Alliance’s work, b) request that their MOA with eThekwini Municipality’s Human Settlements Department be expedited and signed before the close of the financial year, c) request that the Know Your City campaign be recognized by the city as an important strategy for collaborative informal settlement action to build resilience and guide climate-friendly investment in infrastructure and upgrading, d) introduce the city to GIB and share an update on the SDI/GIB partnership, and e) to demonstrate SDI and the SA Alliance’s intention to increase support to city efforts to become a leader in inclusive climate and resilience informal settlement action and to accelerate implementation of commitments made in the New Urban Agenda towards the SDGs.

“We don’t come to the mayor looking for handouts” says Rose. “We’re bringing ideas, partners the city needs, and we’re ready to work.”

From the City’s side, there were three strong women at the table. Mayor Zandile Gumede is among a growing cadre of female mayors leading global discussions to ensure that the poorest and most vulnerable urban citizens are at the center of climate change responses. She currently serves as the Chair of C40 Africa where she advocates this approach. Globally, the number of women mayors is rising rapidly, which many believe bodes well for inclusive resilience planning and implementation. Indeed, the Resilience Strategy of eThekwini Municipality, formally adopted by the eThekwini Municipality Council in August 2017, is spearheaded by an all-female team comprising Debra Roberts (award-winning global climate change leader), Jo Douwes, and Manisha Hassan, is a product of a four-year consultative process with a broad and diverse group of Durban’s stakeholders. The SA SDI Alliance provided critical inputs to one of the two critical Resilience Building Options of the Strategy, namely: collaborative informal settlement action.

The Mayor said that it was refreshing indeed to engage with groups so clearly seeking positive change. She expressed confidence in the Human Settlements team’s ability to get the MOA signed quickly to ensure stronger communication and implementation at greater speed. She recommended that implementation of the MOA involve the convening of administrative and political officials in order to strengthen leadership capacity at all levels. She highlighted the need to work together to advance the city’s 5 year agenda and to ensure eThekwini, the SA SDI Alliance, and SDI continue to collaborate at the local and global level to showcase the power of community-government partnership for implementation of global urban and climate agendas.

When Mama Mkhabela speaks of Beryl she says, “Truly speaking I’m so happy. We are very lucky to have a woman in that position. I can say, she respects me. I respect her. She took a while to understand the federation, but when she did she started to call me her mother. Even if I call her at night she has to respond. If she can’t answer your question right away, she will call you back. We work hand in hand.” When women can forge authentic, humble, thoughtful relationships such as these, institutional partnerships between the city and communities that are based on respect and practical action emerge. Such partnerships have the potential to mitigate the overinflated egos, political turf battles, short-sighted and self-serving approaches that have characterized male-dominated city politics in eThekwini and beyond.

While the centrality of women’s social relationships as a critical resource in community-based political mobilization has long been recognized in South Africa and abroad, city decision making remains dominated by males. If the walls of the Mayoral Boardroom could talk they would have countless tales of hustlers hustling on behalf of their own personal interests. But these women are hustlers acting in the interest of their community. Women transformers from the community, the city, and the international development sector have the opportunity to generate practical collaborations and partnerships to shift the status quo through new models of leadership and pragmatic action aimed at improving the lives of communities. Critically, women transformers from the community must not devalue the power within themselves by elevating leaders or partners – male or female – above the grassroots collectives from which they emerged.

Let’s keep an eye on eThekwini’s community, professional, and government Women Transformers and see if, indeed, they can transform city governance and the slums of their cities as the t-shirt promises.

SDI is often asked, What about the men? Of course, men are an integral part of the SDI movement and the struggle for inclusive and resilient cities. In the meeting described, there were inspiring and committed male leaders and professionals: namely, Jeff Thomas from Utshani Fund, Ndodeni Dengo from Informal Settlement Network (ISN), and Arnotte Payne from CORC (all part of the SA SDI Alliance). These men toil hand-in-hand, day-in and day-out with the women mentioned in this blog. As a leader from SNCC (Civil Rights Movement in the USA) once said of working with strong women leadership, “you come to realize that manhood isn’t the ability to knock someone down but finding your own humanity.” Jeff, Ndodeni, and Arnotte embody this viewpoint and understand that it is not heroic individuals but committed organizers that will sustain a movement and transform the status quo.