The Protest, The Representatives and The Petition: Kenya Evictions Diary 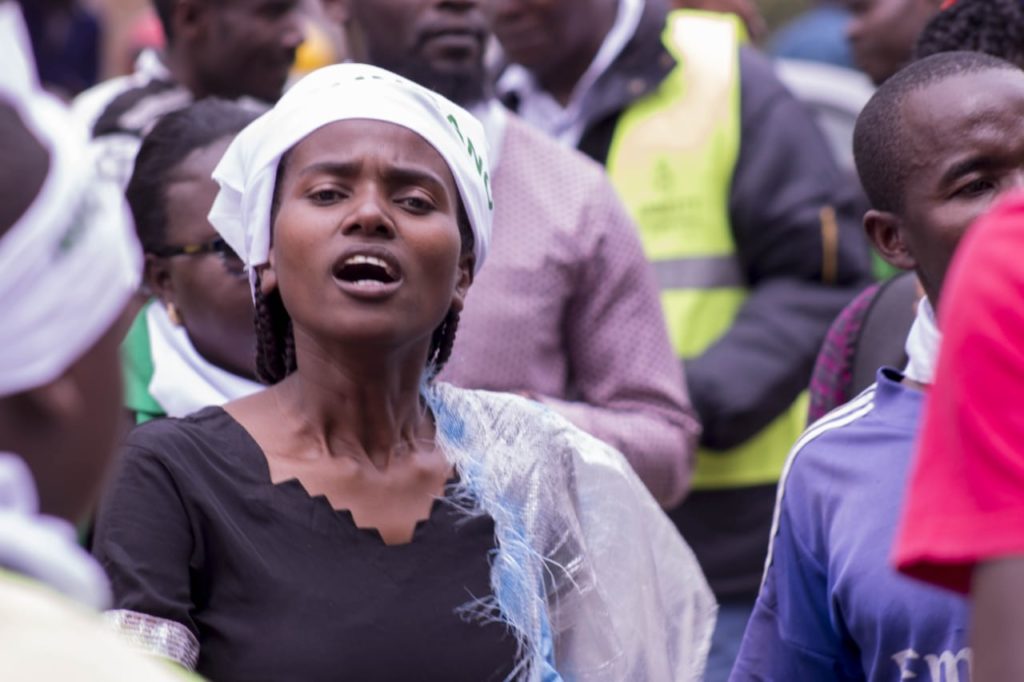 It’s Day 8: Demo Day. The procession of 300 to 400 slum dwellers gets moving at 10 am. There is a small smartphone army of NGOs who are continuously dashing ahead of the procession to snap away. Some idiot runs forward and takes a selfie. To the dismay of the federation, one of the partner NGOs has hired a marching band to lead the procession.

From Freedom Corner – a memorial to the struggle for Kenya’s Independence –the orderly musical procession makes its way to the Ministry of Transport. The Ministry houses the ‘Multi-Sectoral Committee on Unsafe Structures’, who are behind the Nairobi evictions.

As the procession approaches the Ministry of Transport, the gates are quickly closed and padlocked. First, the lead team asks to speak to the Minister’s office, informing them that their only interest is to deliver a petition. There’s frantic activity behind the gates; a Mercedes car parked near the gate is driven away. Faces are peering from the Ministry offices. Two armed police officers come to the gate. After a couple of protest songs, there still is no response from the Ministry. The perfect cue that the slum dwellers are waiting for. Time to breach the awkward, but for me rather comfortable, civility. Free at last!!!

A cry rises above the marching band: to retreat from the Ministry’s gate and back to the street. The strategy is to block the road. Someone says in Swahili, “A little tear gas is good for the soul.” The road is quickly occupied. A new energy is starting to take over. The script goes out the window, and is replaced by an anger that has seemed to be sadly absent in the last week. Another voice demands, “Demolish our homes, we are coming to take your fancy houses.” The blocked traffic starts to turn back. Pedestrians hesitate to walk past. Some in the NGO crowd start to drift to the edges of the crowd – distancing themselves and pretending to be documenting on their phones.

“Kumekujwa,” someone says. The nearest English equivalent is, “There is an arrival.” An unmarked Land Cruiser with darkened windows parks a few meters away – no one comes out. On the other side, a police truck stops and half a dozen police jump out. No one misses the teargas canisters in their hands, no one stops singing and jiggling. To show defiance some people sit and lie on the road. I suddenly have a deep need to find an outer position to take a panoramic picture on my iPhone. The KYC TV camera guy has the camera strung behind his back and has his right hand raised in the symbol for struggle. I’m certain his KYC TV teacher/mentor in Cape Town would be horrified. I force myself to jump up and down instead.

Battle-hardened federation mama Emily engages the lead officer: “All we want is to give them our petition. Why are they wasting our time? Tell them to come take it, I need to go home before the kids come from school.”

“You,” the officer barks back, “are causing a traffic problem – you need to get off the road.” Emily’s response is lost.  The crowd is suddenly wailing. I look both ways — damn! nowhere to run. We are bang at the centre of the roadblock.

Now Emily has the officer’s arm and is marching to the Ministry gate. Then the officer is talking to someone behind the gate. Then a voice from the federation team near the gate commands, “Give them one lane!” The crowd is upset. Someone starts a countdown, the crowd has turned to the gate and is counting down – we are going to storm the gate. I turn around and some onlookers have their hands inside of their blazers – pistols are being pulled out.  All the four doors of the unmarked car are now open. The marching band are across the road, opposite the Ministry’s gate. The band are hurriedly packing their instruments.

Within the crowd, the federation leaders know there is a deal being done at the gate. They start herding the crowd, “Let’s give them one lane for five minutes. They don’t open, we take the road again,” they shout.  Reluctantly, the crowd is marshalled to one lane. The tensed police stand down too. The moment passes, I breathe out.

The gate is partially opened and a few people are let in.

In 1997 Papa, now 67 years, was part of the first Kenyan slum dweller exchange to South Africa. He is first through the gate. Ezekiel, federation president and the man with the script and petition, is next. Emily, with the lead policeman still in hand, goes in next. A mostly troublesome “senior youth and suspected police informant” muscles in. Next, petite and clad in a hijab, a new but passionate leader from Mukuru slums. They want to shut the gate, then a mama squeezes in – no one is sure which settlement she’s from and she’s holding the arm of another mama. The negotiating team is in and the gate is shut. Someone says, “That last one is a real stupid,” everyone laughs. Someone starts singing, everyone joins in. Symbols sound and the marching band is back.

45 minutes later, the team emerges with the Housing Secretary. He mounts a chair behind the gate and is handed the protest mega phone. He lyrics all lovely things, “We need a national database of slum dwellers”, “Government will build 200,000 social houses…”

Ezekiel then addresses the crowd. He reports the deal they’ve made and is heckled. “We want blood, we want justice, we sent you to drag them out here by the ears and you bring us an agreement instead?” they shout. And it truly seems all too easy.

Everyone is exhausted, plans to deliver other petitions are abandoned and the crowd melts easily into the street. Soon, we cannot see the other civil society organisations. We get Ezekiel and Emily to debrief us over lunch, overlooking the Ministry.

To start, they narrate the proceedings of the meeting. By any standard applicable it sounds like a totally shambolic affair:

First, the woman from an unknown settlement jumps right in and accuses the housing ministry of interfering with the selection of representatives to a slum upgrading committee in her settlement. And as her tone rises, the stupid one breaks down and starts crying about the pain she feels about how government has treated her family. Emily tries to establish some sanity, but the ‘senior youth’ jumps up, whips a Kenyan flag from his waist and says he’ll hang himself right there with the flag. “Better I kill myself right here than you come at night to kill me and my children in my shack,” he shouts. It’s going terribly.

Emily asks them to calm down and asks senior leader Papa to speak. Papa in turn and with complete gravitas, begins by informing the group that he went to New York in October last year: “…And even though I missed my flight, they got me to the next flight and when I got there… ” Again Emily has to jump in. Finally, Ezekiel comes in and does the proper representation and also asks to read the petition in summary. The Housing Secretary takes notes and, just as he prepares to respond, the passionate new leader in a hijab, says she would like to share. And share she does. She talks about the federation’s Special Planning Area project in Mukuru slums, probably all she knows about Muungano.  Emily is concerned that the Secretary now looks totally dumbfounded.

When he finally gets the chance to speak the Secretary says the following: first, he has listened with complete attention because he can see that this cannot be an NGO organised protest, “You people, I can see, are genuinely from the slums.” He also observes that there is a lot of pain and third, the petition. The petition, he says, carries everything that the government aims to achieve. He further says that what government would like is a database of all slum dwellers, nationally, that are sitting in dangerous and unsuitable places and an engagement with them and Muungano to discuss their resettlement. Emily let’s him know: “All you needed to do was ask.”

Day 9: The Housing Secretary calls the federation chair early to ask for the other petitions with people’s signatures. He will deliver them himself to the Governor.

At the end, it was all about the protest, the representatives, and the petition. All three could only be delivered so elegantly and successfully by the people who live through the trauma of demolition – by the federation.