Highlights from the Nigeria Federation: A year of hard work shows great results 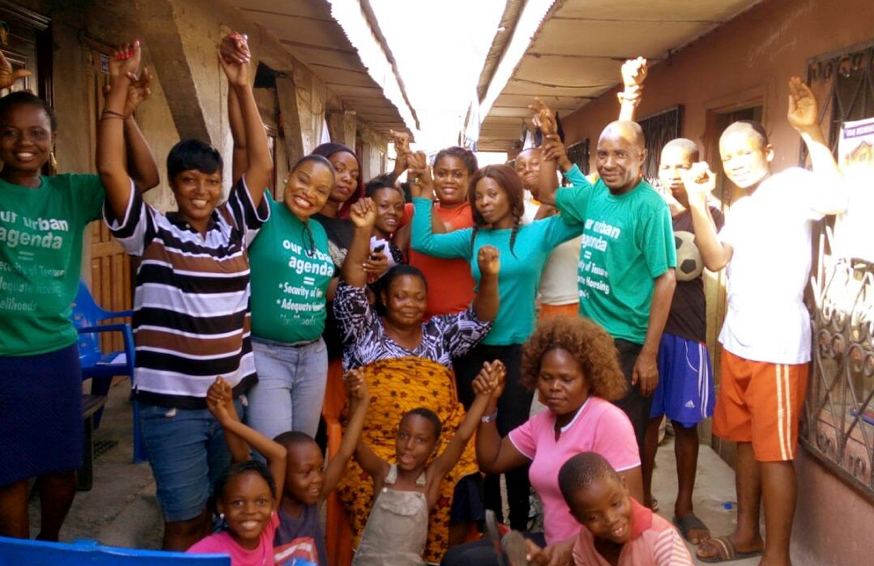 Despite being one of the younger affiliates in the SDI network, the Nigerian SDI Alliance – comprised of the Nigeria Slum / Informal Settlement Federation and support NGO Justice & Empowerment Initiatives – is doing impressive work building a solid foundation of networked savings schemes, using community-collected data to negotiate eviction alternatives and improved living conditions for their communities, forming active partnerships with government and other urban decision makers, and building capacity and momentum in local youth to catalyse greater change. Below are  some highlights from the affiliate on their activities over the last year.

The LGA Coordinators also generally serve as point persons for all Federation activities within their LGA (e.g. profiling or enumeration efforts). LGA coordinators effectively serve as ‘second tier’ leadership within the Federation even though there is no formal overall leadership structure.

Additionally, in order to emphasize the importance of savings as a core ritual, the Federation instituted a policy that all Federation volunteers would be required to submit copies of their savings passbooks on a monthly basis to show that they are active savers – this cuts across all aspects of Federation work, including that of the media and the profiling/data teams. This has helped to ensure that all Federation work continues to be anchored by community level savings groups as the fundamental building block of the Federation. 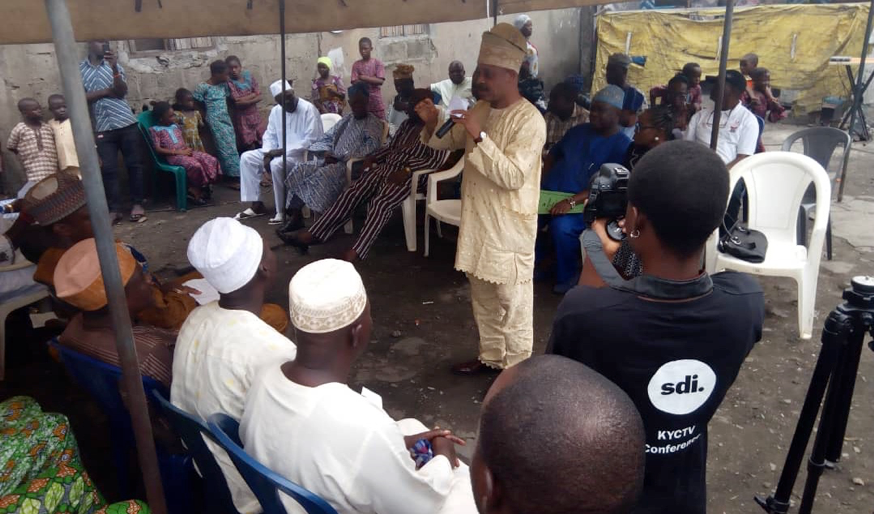 To support community planning and partnerships outlined below, we have developed a number of maps, charts, and graphs that present the Federation’s profiling and enumeration data towards specific purposes. When a community completes profiling – a simple map of the community is produced and given back to the community for their own records and use. In Port Harcourt, towards building a collaboration with the Ministry of Works around improving community drainages, we have also developed drainage maps. 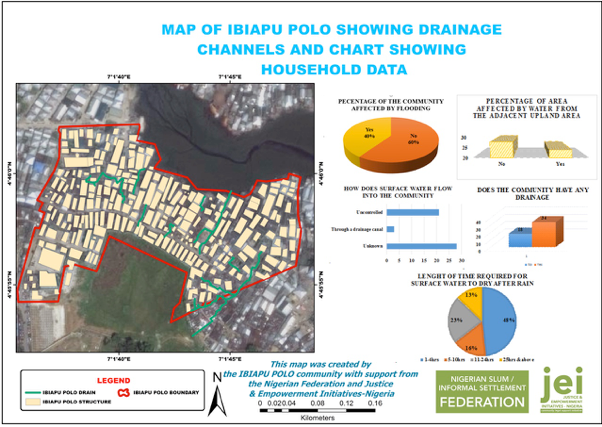 In both Lagos and Port Harcourt the Federation has been working to put their data to work – primarily in the context of engaging with government. In Lagos, our engagement with Lagos Urban Renewal Agency (LASURA) towards upgrading Orisunmibare community (and potentially 2 others) is largely informed by the enumeration process carried out in the community together with several LASURA staff. In Port Harcourt, the Federation is working with both the Water Corporation and the Ministry of Works towards community upgrading efforts – improving access to water on one hand, and improving drainages on the other hand. The interest of the Water Corporation and the Ministry of Works to work with the Federation was, in both cases, piqued by the data that the Federation had already collected.

The Federation has collaborated with the Department of Geography at University of Lagos and LASURA towards localizing and measuring indicators for Sustainable Development Goal (SDG) 11 – particularly around access to services and climate change resilience and adaptation. The Federation and JEI developed a household survey module that can be added on to our standard enumeration form to capture data about SDG 11.

Another collaboration that the Federation developed was with the Landlord and Tenant Association of Apapa LGA, tackling access to electricity (overbilling and estimated billing). This partnership evolved from a single paralegal case assisting Federation members wrongfully arrested and detained at the instigation of the electricity distribution company to try to silence their advocacy for better access to services, to an LGA-wide house numbering effort facilitated by the Federation towards negotiating better terms of service with the electricity distribution company. Because of the federation’s efforts, the member of the Lagos State House of Representatives for Apapa LGA and the Police Area Commander have participated in meetings to try to resolve the simmering dispute – and have largely supported the Federation’s position against extortionate billing. This negotiation process is still ongoing, however, it has afforded the Federation a lot of productive learning about mass mobilizing and using data to push for improved access to services, while drawing (political) allies to the cause. 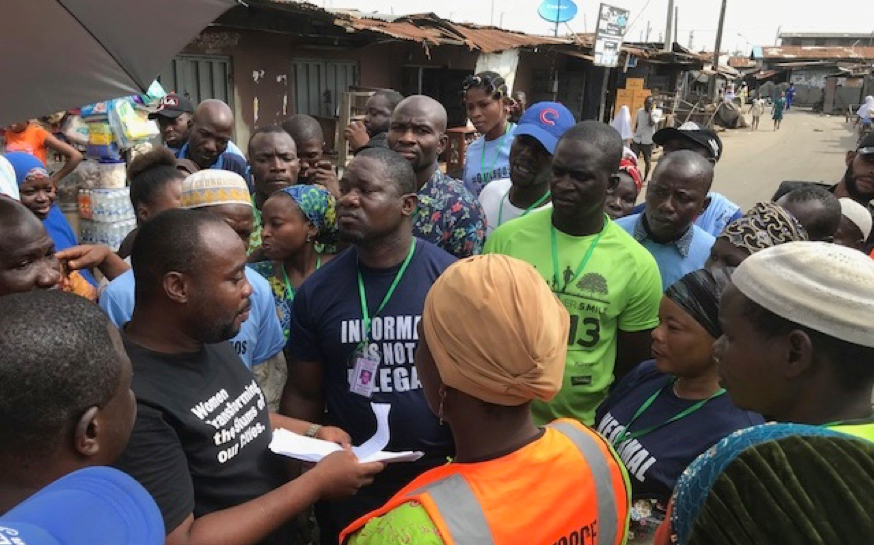 In Lagos, our partnership with Lagos State Urban Renewal Agency has continued to develop primarily through the process of working towards an inclusive in-situ upgrading process in Orisunmibare community. This process – the first of its kind in Lagos – has included community-level data collection through a participatory enumeration together with LASURA, establishment of a community upgrading committee, and dozens of planning meetings to date. As a result of these efforts, LASURA was able to obtain a budget from the State Government for 2018 to specifically support their engagement in the planning process in Orisunmibare.

Separately, the Lagos Federation has been engaged in an Affordable Housing Working Group set up in 2017 to think through mechanisms and designs for affordable housing in Lagos. The working group includes members from the Lagos State Ministry of Housing as well as a group of urban planning, architecture, and housing professionals. During the period numerous meetings were convened and a proposal for a government-backed housing trust fund that is truly accessible to the urban poor is being developed. 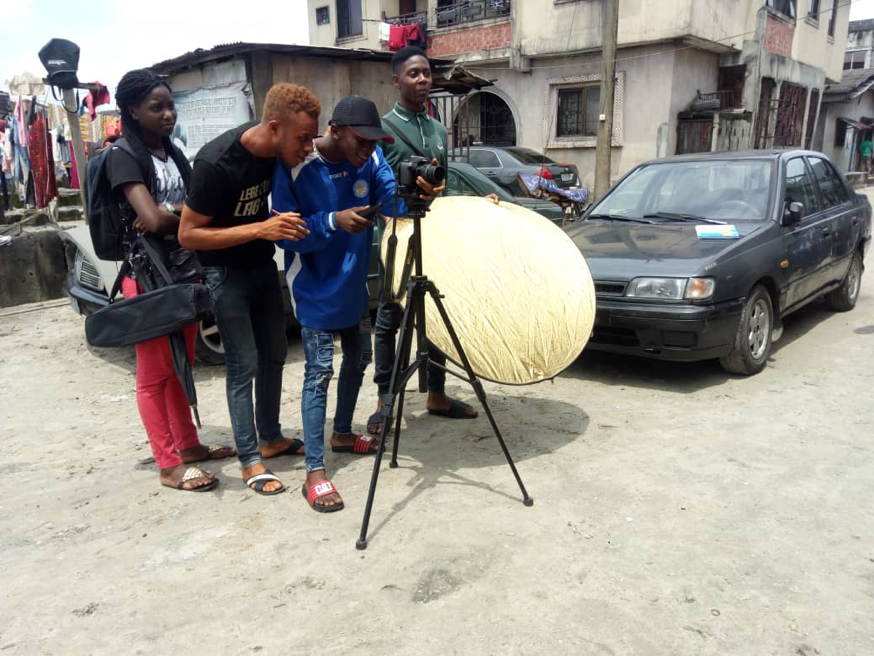 KYC.TV media team in Port Harcourt on a shoot focused on access to health services in Federation communities

During the reporting period the youth Federation’s Know Your City TV team grew and matured by leaps and bounds – transforming from a group of young Federation members interested in making media, to a much more organized, focused, and talented team taking their own initiative to launch new projects. This transition was anchored by a regular series of trainings, exchanges, and other engagements that served to hone skills, build excitement, deepen engagement of the KYC.TV team with the larger Federation, and sharpen our collective focus on making media for change.

The other major area of youth engagement was in further training and growing the KYC profiling and data teams in Lagos and Port Harcourt – which led a number of intensive efforts to enumerate several settlements towards planning upgrading, house number communities towards engagement with electricity distribution companies, and refine data capture processes — both for KYC and for the Nigerian Federation Savings Database.