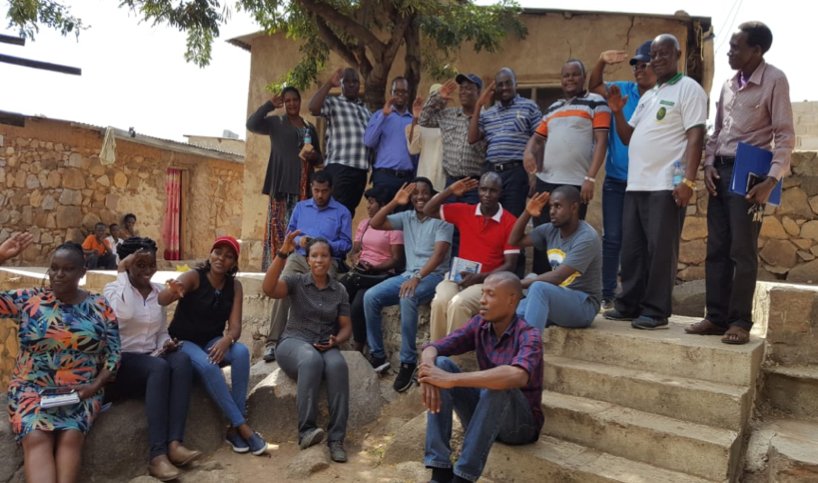 In early February, the Water, Sanitation & Energy (WSE) Consortium of the Mukuru SPA project in Nairobi, Kenya traveled to Tanzania for a learning exchange to visit simplified and decentralised sanitation systems. The Water Sanitation and Energy consortium is one of the eight consortia, contributing to the Mukuru integrated development plan and its implementation through the development of water, sanitation and energy sectorial plan.

Objectives for the learning exchange visit

The main purpose of this learning exchange visit was to:

The pilot project at Vingunguti was carried out by CCI & the Tanzania urban poor federation. CCI is a local based non-profit organization which supports urban poor communities with housing and shelter; community savings and credits and informal settlements upgrading. CCI has developed different approaches as interventions for the challenge of sanitation in urban areas, i.e. construction of simplified sewerage system and toilets for individual households.

Highlights of the visit:

The Acting Director of Dar Es Salaam Water Supply and Sanitation Authority (DAWASA), Eng. Aaron, welcomed the participants and officially opened the workshop. The workshop main agenda was presentations from DAWASA, CCI, BORDA and WSE consortium. The presentations were followed by group discussions, questions, brainstorming and the way forward for each group present.

Highlights of the Workshop:

BORDA welcomed the group at their office in Mikocheni, Dar Es Salaam. BORDA was founded in 1977 as non-for-profit organization in Bremen. Since 2001 BORDA exclusively facilitates a network of development cooperation that focus on providing basic need services (BNS) to disadvantaged segments of society.

BORDA is facilitating the BNS Network in Africa (Tanzania, Zambia, Lesotho, Mali and South Africa) and has played a big role in solving sanitation challenges in Tanzania through decentralized wastewater treatment system (DEWATS).

The Mwanza Urban Water Sewerage Authority (MWAUWASA) team hosted the WSE consortium for the two days spent in Mwanza. The MD gave brief welcoming remarks and invited both teams from Kenya and MWAUWASA to share ideas around the ways that we can make our cities better in terms of improved water and sanitation services, mainly focusing on long term solutions.

MWAUWASA was established in July 1996 with legal mandate to supply portable water and sanitation services to Mwanza city. MWAUWASA has constructed two major simplified sewerage pilot projects in Kilimahewa and Mabatini area through support from government of Tanzania, UN-Habitat, and European investment bank. The two projects that started as pilot projects has now been scaled up to nine other on-going projects majorly funded by the Government of Tanzania and other donors.

Highlights of the visit:

The visit to simplified sanitation schemes in Dar Es Salaam and in Mwanza exposed WSE members to new and feasible options of sanitation and increased their knowledge on how wastewater can be sufficiently managed where conventional sewerage systems do not exist or are difficult to construct. Lessons learnt during the visit will contribute and advise the WSE consortium as they plan to develop the water and sanitation sector plans for Mukuru informal settlement. Lessons learnt on approaches used to promote community engagement, participation and empowerment for sustainability of these initiatives will also be considered and incorporated in the plan.