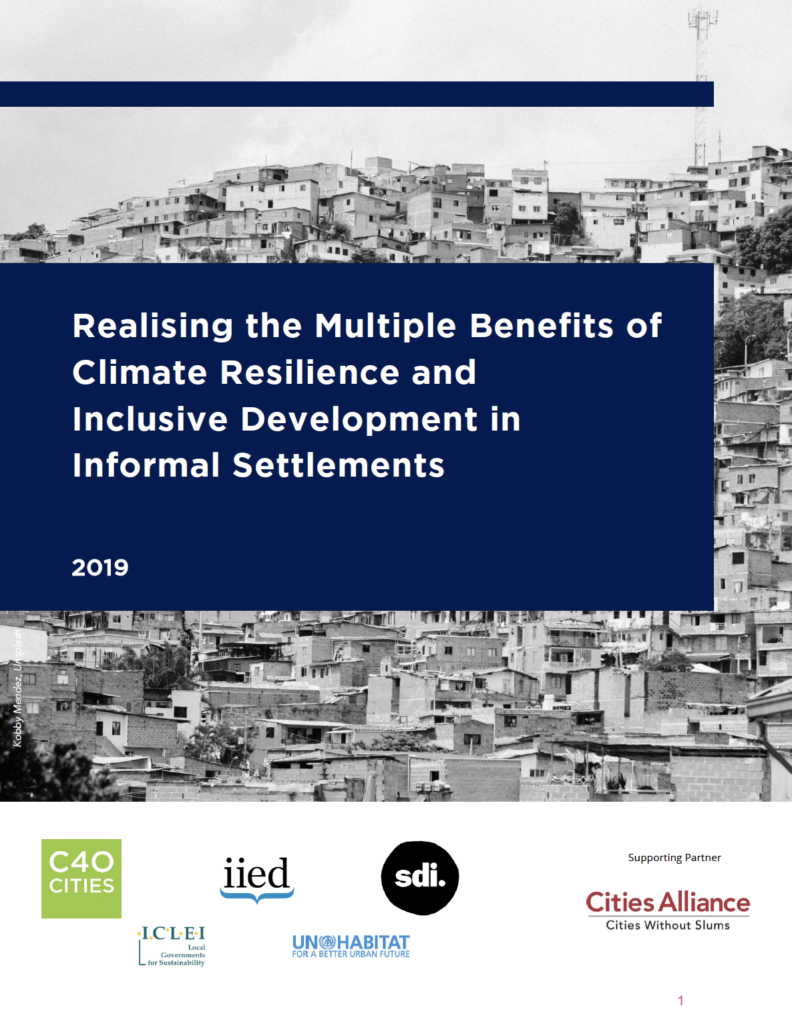 A publication by C40 Cities, ICLEI, IIED, SDI, and UN Habitat, with support from Cities Alliance.

Climate change will worsen many existing shocks and stresses, in addition to creating new challenges in informal settlements (‘slums’) 1 . Climate and disaster-related risks in cities cannot be addressed without upgrading informal settlements; likewise, upgrading will be futile unless the impacts of climate change are taken into account and incorporated. Due to low incomes, fewer assets, and limited voice in governance, residents of informal settlements often lack the capacity to cope with climate risks. Additionally, recognising that informal settlements are not a homogenous group and individuals can be characterised by age, gender, occupation and disability etc, is crucial for policy interventions. Oftentimes, these individuals are likely to be more vulnerable than others and therefore should be considered in upgrading, to ensure an equitable distribution of benefits across an informal community.

This report explores how upgrading informal settlements can simultaneously help in achieving climate resilient, inclusive and low carbon development leading to multiple benefits. Upgrading is a process of improving living conditions in informal settlements, often by providing shelter and services while supporting economic development via stronger links with the ‘formal’ city. Interventions can range in scale and levels of community participation, and they may vary in scope from single-sector projects (e.g. water-taps, electrification) to multi-sectoral programmes. Along with analysing the benefits of key upgrading actions, the report offers a case study of a holistic intervention currently planned in Nairobi’s informal settlement of Mukuru.

This report identifies ten particularly promising upgrading actions with potential to foster multiple benefits and advance several Sustainable Development Goals (SDGs). These interventions are specific to the context of Mukuru and are:

The above initiatives have significant potential to yield multiple benefits, as highlighted in Section 2 and Appendices 1 and 4, such as:

The study of Mukuru also provides several key considerations and recommendations for international, national, local policymakers and NGOs as outlined in Section 4. The key lessons learned from Mukuru are: