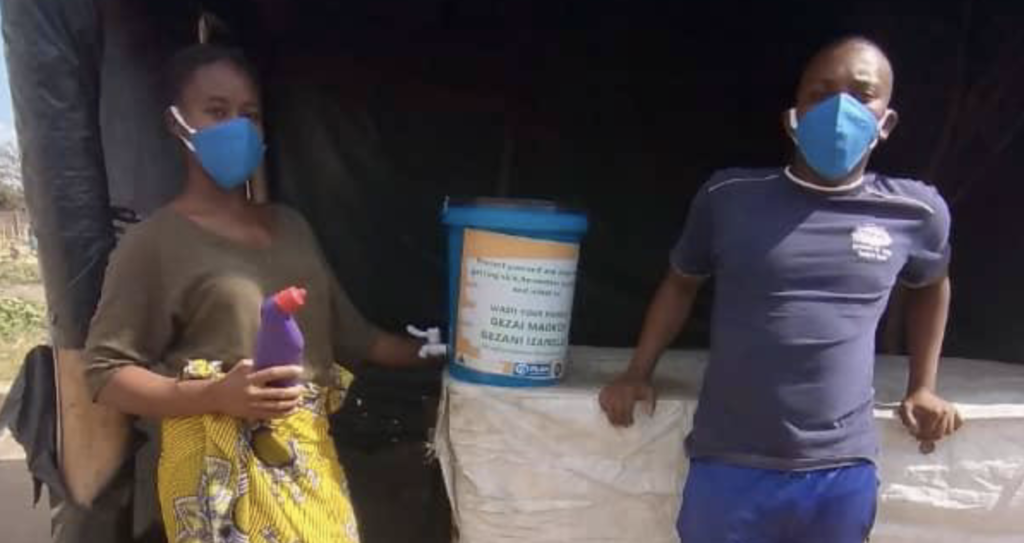 On behalf of the the The Zimbabwe Homeless People’s Federation and Dialogue on Shelter Trust, SDI presents the work to fight COVID-19 in Zimbabwe. The following is an account from the SDI affiliate in Zimbabwe.

Zimbabwe recored its first Covid 19 case on the 20th of March 2020. On the 23rd of March the nation recorded its first C19 death of a well know public personality. This jolted skeptics to the reality of C19, a few weeks after a Government Minister had dismissed C19 as a disease of the West that does not affect Africans. On the 30th of March the government announced the beginning of the first lockdown phase. The lockdown has been extended into phase 2, which allowed businesses to open. Intercity travel is prohibited. Unfortunately, the relaxation of lockdown rules has resulted in an increase in confirmed cases. As at May 31st 2020, Zimbabwe had 178 confirmed cases, 29 recoveries and 4 deaths out of a total of 45,395 people tested. The confirmed cases are mainly returnees in Government Quarantine centres. These centres have become a hotspot of COVID-19 infections. This has led to the stigmatization of returnees. Most agencies have been urging government to accelerate its testing.

Impact of COVID-19 in Zimbabwe slums

The Covid19 pandemic has presented complex health and humanitarian crises to the Zimbabwean society which was already burdened with a crippled health service, economic and financial crisis as well as unemployment and food shortages. Other governments responded to the pandemic with lockdowns in the interest of flattening the curve. While these measures are commendable, they have been viewed with much skepticism in terms of how they have been roundly applied to contexts in the Global South without regard to the different realities such as widespread poverty and inequalities. Conditions of urban informality rife in the Zimbabwe, for instance, beg for customised and measured responses. Social distancing, in particular, may not neatly work with overcrowding in slums. Informal business closures also suffocate the very lifeline for most slum/urban dwellers who sustain livelihoods on daily incomes. The high incidence of informality in the Global South also means that there is potentially high risk of  exclusion of slums and informal businesses in both public and private sector-driven responses to the Covid-19 crisis.

The Zimbabwean government has responded to the C19 reality by demolishing all informal trading spaces in all areas of the city including residential areas. The C19 is being used as an excuse of demolishing informal markets and homes under the disguise of sanitising and decongesting the city. Unfortunately, this has increased the number of homeless people and overcrowding as families take in evictees. In addition, the markets for basics such as fruit and vegetables are now centralised. The markets now open for a short time forcing people to converge and crowd the market for the short hours they are open. The markets are a potential hotspot for C19.

On top of this, the loss of employment due to C19 has resulted in families loosing income and failing to pay rent. Evictions of non-paying lodgers are imminent..

Crowded and poorer settlements, where it is difficult for people to safeguard themselves against getting infected, are likely to see worse outcomes. The COVID-19 pandemic has created a disruptive new normal for everyone through its social distancing guidelines. But for the urban poor households, these guidelines aren’t just burdensome but they are essentially impossible. Social distancing is a critically important response to the pandemic, but it also assumes that people have adequate space, services and social safety nets to survive such an order. This is simply not the reality across slum settlements in urban areas.

Against this background, the Zimbabwean SDI Alliance received resources towards the following Covid related strategic priorities and activities:

1.  Contain the spread of the COVID-19 pandemic and decrease morbidity and mortality.

Over the years the Alliance has invested in settlement profiles, enumerations as well as spatial maps of slum settlements. These were used to assess the degree of deprivations in the informal settlements. Information was shared through the government-chaired Emergency Strategic Group that the Alliance is part of. Informal and slum communities such as Mucheke in Masvingo and Tafara in Harare are benefiting from increased water supply through rehabilitation of a borehole funded by SDl and in Masvingo projects funded by the Bilbao.

2.  Decrease the deterioration of human assets and rights, social cohesion and livelihoods

When the first case of Covid was confirmed The Zimbabwe Homeless People’s Federation stopped all federation meetings, even before the government announced a lockdown. However, the Alliance became concerned that the social cohesion of groups would be compromised by not meeting. To continue communication with groups, leaders set up social media platforms. The platforms are being used to communicate with savers. Some groups have now started saving. Some are saving using mobile money, others are meeting in small groups to save, respecting self-distancing as required by our lockdown rules. Some groups are splitting up so that they have smaller groups as well as meeting for not more than an hour. Some groups have revived community gardens to augment food sources. The next steps are to continue to check the status of all savings groups as well as to develop guidelines for saving and maintaining group cohesion when living and working with Covid. With the funding from SDI, the Management Committee allocated resources to all the 12 federation regions. Allocation was on the basis of the number of active savers in the region. The regions were divided into 3 categories from the biggest region to the smallest in terms of membership. Each region decided on its priorities. The funds were used to support the following activities:

A total of 3702 households were direct beneficiaries of the funding.

3.  Protect, assist and advocate for communities particularly vulnerable to the pandemic.

The government embarked on a program to demolish informal markets as well as some settlements when they announced the lockdown. The demolitions are being regarded as preparedness plans to sanitize informal settlements to minimize the spread of C19 in informal settlements. Authorities in the past had failed to demolish these markets and settlements because of legal challenges to the evictions as well as political resistance. However, C19 has given authorities an excuse to undertake unchallenged evictions. The Alliance has engaged Legal Resources Foundation to assist in preparing a class action to fight the evictions. To this end, the Alliance has prepared a Standard Operating Procedures to guide the Dialogue on Shelter Trust staff how to support Federation activities during C19. In addition, the Alliance prepared a policy brief to be used with government and other stakeholders in planning and implementing interventions and advocacy activities related to C19 in informal settlements.

Groups have closed bank accounts because of expensive bank charges. It took long to send money safely through Mukuru to different regions.  The tariffs of 7% of transaction value was also expensive.

Some groups failed to purchase their priority items due to scarcity.

Some groups failed to produce their own loans due to lack of transport to cities where the ingredients are sourced.

Only a quarter of the membership directly benefitted from the funding and small portions.

Initially the alliance was waiting to resume activities after Covid. What is apparent now is that the Alliance has to devise ways of working and living with Covid and are therefore planning to:

Please keep following SDI as we highlight the initiatives of SDI affiliates across Africa, Asia & Latin America in the fight against COVID-19 to support the most vulnerable throughout this pandemic.