SDI at COP27: Co-creating resilient and just climate future and effective climate interventions that are inclusive of the urban poor

Join SDI at COP27 this year, as civil society organisations, governments and other agencies come together to discuss the way forward to reducing global carbon emissions to tackle the ever-growing climate crisis.

Egypt is hosting the 27th UN Climate Change Conference of the Parties (COP27) from the 6th to the 18th of November 2022 in Sharm El-Sheikh. This year’s summit will bring together governments, civil society organisations and others to accelerate much-needed global action to confront the climate crisis.

The COP27 summit will attempt to build on the Glasgow Climate Pact that was agreed upon at COP26 which included, amongst others, calls for scaling up of adaptation finance, ‘phasedown’ of coal and a completed Paris Rulebook.

The Egyptian host is pushing to prioritise climate finance as industrialised countries are failing to pay their fair share towards the $100 billion goal, with the New Collective Quantified Goal (NCQG)0 on the horizon.

For SDI, this serves as an important platform to raise and amplify the voices of the urban poor – particularly women and youth, and showcase their work, action and achievements.

At this year’s event, we would like to highlight the following

Over the past year, SDI has been actively involved in furthering Locally-Led Adaptation principles. Our work and case studies have been featured in the latest GOLD VI Report which aims to highlight methods and strategies on the ground which are addressing inequalities through local transformation strategies.

Alongside our grassroots network and partners (World Resources Institute, IIED, Huairou Commision, among others) we are bringing and highlighting the importance of our work to advance the LLA principles on the global stage.

In line with that, SDI’s key messages for COP27 are:

To realise a resilient and just climate future, effective climate interventions must include organised urban poor communities – particularly women and youth – as lead designers, planners, and implementers of climate solutions.

Organised communities have the skills, capacities and systems to drive and deliver locally-led adaptation to the climate emergency and channel climate finance to those who need it most.

Faced daily with disasters ranging from floods to fires to evictions, urban poor communities are working with each other and with other stakeholders to build climate justice from the ground up.

The work of SDI affiliates demonstrates the power of urban poor communities to advance locally-led climate justice action. Development agencies, governments, and multilateral must partner with these communities to resource, replicate and scale this work to affect real change.

Along with various speaking engagements outlined below, SDI will be co-hosting our own event at the COP27 Resilience Hub. Please see details below and join us in person or online! 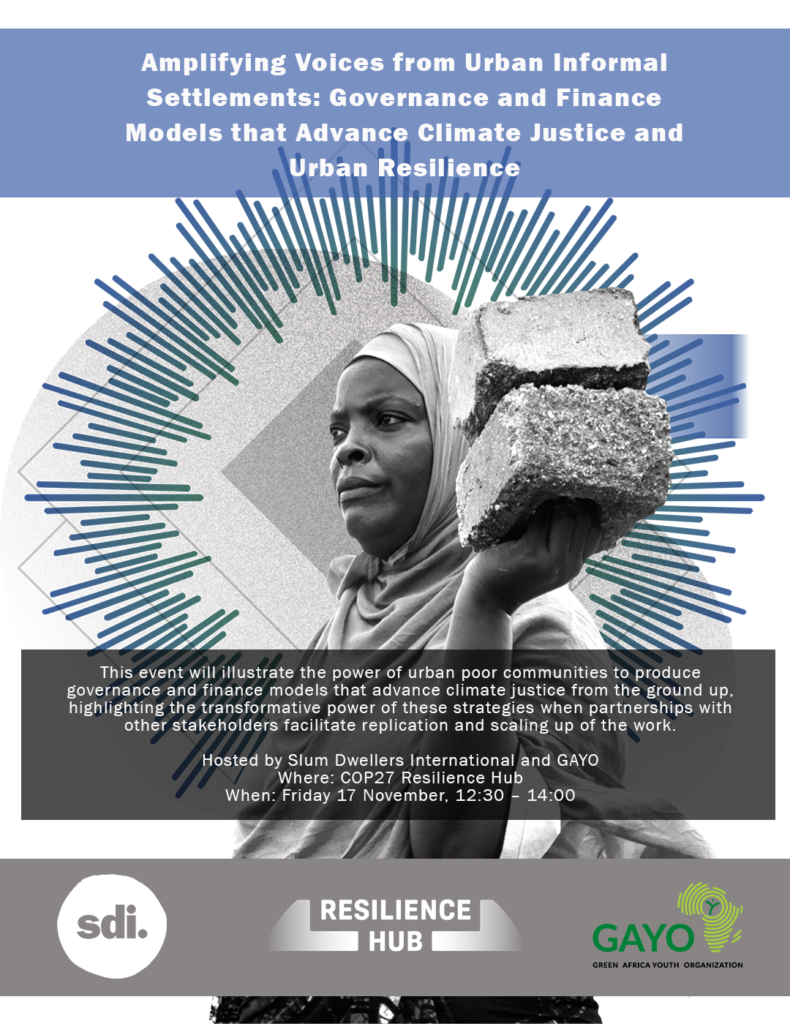 To realise a resilient, just future, effective climate interventions must include organised urban poor communities – particularly women and youth – as lead designers, planners, and implementers of climate solutions. Evidence shows that these communities have the skills, capacities and systems to drive and deliver locally-led adaptation and channel climate finance directly to communities who need it most.

This session will illustrate the power of urban-poor communities to produce governance and finance models that advance climate justice from the ground up, highlighting the transformative power of these strategies.

Join us for this event which will illustrate the power of urban-poor communities to produce governance and finance models that advance climate justice from the ground up, highlighting the transformative power of these strategies when partnerships with other stakeholders facilitate replication and scaling up of the work.

Side-events SDI will be a part of:

Better Cities: A Radical Agenda for a Transformative Urban Future

Who: A collaboration of Reos Partners, the Climate Champions team, TED Countdown, and Leaders’ Quest

Who: Habitat for Humanity International

Roof Over Our Heads Launch Event

Resilience indicators, tools and financing methods: How to bring tools into everyday resilience building practice? How to ensure that community voices guide these technical practices?

The Missing Billion: How to ensure Equitable, Sustainable and Climate Resilient housing for residents in informal housing

Who: Habitat for Humanity Egypt

Meet some of our SDI at COP27 climate leaders here:

The SDI delegation participating at COP27 is comprised of community leaders and professionals implementing and supporting climate action work at the settlement, city and global levels.

Theresa Caramptana is the President of the Homeless People’s Federation, which she has been a member of since 2010 and is a member of SDI’s Board. In recent years, Caramptana has led the federation’s efforts to partner with the government to enable the implementation of community-led slum-upgrading efforts, which has included disaster risk reduction, Covid-19 relief and response efforts and climate adaption projects in slums and informal settlements across the Philippines.

Melanie Chirwa has over a decade of experience supporting community-led initiatives addressing security of tenure, housing, and delivery of basic services in poor urban communities. Chirwa holds a Master in Disability Health and Illness, Sociology and Social Policy from the University of Leeds. She has also worked with organised communities of the urban poor on livelihood initiatives, policy influence, governance and climate change. Chirwa’s experience has enabled her to build strong networks with the government as she plays an influential role in strengthening the relationship between the government and poor communities.  She has also supported communities to use their capacity to negotiate and influence policy towards an inclusive, pro-poor agenda enabling partnerships with poor communities.

Ariana Karamallis is currently the Programmer Coordinator of Advocacy, Resilience and Federation Building at the SDI Secretariat in Cape Town, South Africa. Karamallis is responsible for establishing, securing, and growing SDI’s global advocacy, climate justice and resilience, and federation-building portfolios. Karamallis has a Master of Urban Planning from New York University and a BA from Smith College. Karamallis’ area of expertise includes urban informality, climate justice, resilient urban systems, working with urban-poor communities, informal settlement upgrading, gender justice and anti-racism. Over the last decade, Karamallis has supported SDI and other grassroots networks to advance their global advocacy and communications work in intentional and strategic ways.

Zilire Luka is the executive director at the Centre for Community Organisations and Development (CCODE) in Malawi. CCODE is a non-profit organisation that was founded in 2003 and works in alliance with the Federation of the Rural and Urban Poor and is affiliated with the SDI Network. Luka holds a Bachelor of Humanities degree and is an Urban Development Specialist who advocates for the inclusion of voices and the participation of the urban poor in development initiatives. Luka has more than 10 years of experience in result-orientated programme management surrounding urban planning, resilient livelihoods, water and sanitation in informal settlements and peri-urban areas.

Joseph Muturi is a national community leader of Muungano wa Wanavijiji, the Kenyan Slum Dweller Federation, and is the current chair of SDI’s Board. Since joining the federation in 1998, Muturi has played an integral role in negotiating and implementing projects to strengthen the security of tenure and improve living conditions for the urban poor in Kenya. Muturi has supported communities in building consensus on strategy, budgeting, planning and the implementation of projects. He has also played an instrumental part in building national federations in East and West Africa and establishing partnerships with government and key stakeholders for Muungana and the SDI network.

Sheela Patel is the founder and director of the Society for Promotion of Area Resources Centres (SPARC), an NGO that has been working since 1984 to support community organisations of the urban poor in their efforts to access secure housing, and basic amenities and seeks their right to the city. Patel has been widely recognised as an agent seeking urgent attention to the issues of urban poverty, housing and infrastructure from governments, bilateral and international agencies, foundations and other organisations. Patel is also a founder of Slum Dwellers International and has previously served as chair on the board. Patel was the recipient of the United Nations Habitat Award in 2000, the Outstanding Contribution towards Mumbai Vision 2015 by the Observer Research Foundation in 2006, received the David Rockefeller Bridging Leadership Award in 2009, and in was conferred the prestigious award of Padmashree in 2011.